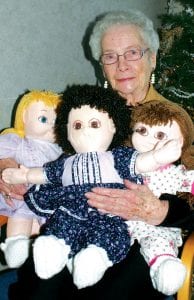 Dorothy Golden, a Fairlawn Haven resident, holds three of her Golden Child Originals dolls that she made with the help of Martha Armstrong, Fairlawn activities director. The dolls will be given to three needy children. During the 1980s and 90s, Golden made more than 700 dolls, which were sold in a Florida yard goods store. In this photo, taken last week, the dolls weren’t quite ready– they needed to have their mouths attached.– photo by David Pugh

Christmas will be much brighter for three girls somewhere, because of the generosity of Dorothy Golden, a resident of the Fairlawn Haven nursing home.

Golden is donating three handmade dolls to two needy families: one with two little girls, and a second with one.

The dolls not only benefit those three anonymous children, they helped Golden as well.

Golden has been involved with dolls her whole life.

“Everybody teases me when I’m carrying my dolls down the hallway,” at Fairlawn, she said.

One of her grandmothers always “liked to make sure that we had a doll for Christmas.”

The three dolls Golden created are three more in a long line of dolls.

In 1984, she and her late husband, Ken, were wintering in Florida when she decided she wanted to make a doll. She and her husband had the doll copyrighted as a Golden Child Originals.

She worked out an agreement with a yard goods store in Ft. Meyers, Fla. She bought the materials from the store, and then the store purchased the dolls for $50 each.

“Grandmas will give their last dime for a doll for her granddaughter,” she said.

She figured she made about 715 Golden Child dolls. Eventually, she developed problems with her hands from putting the stuffing inside the dolls.

“When my hands started getting bad, my husband would help me stuff the dolls,” she said.

She stopped making dolls about 10 years ago.

Recently, her daughter, Holly Barton, brought three doll “skins,” the unstuffed exterior fabric, to Fairlawn. That’s when Dorothy got the idea to donate the dolls to needy children.

Martha Armstrong, activities director at Fairlawn, assisted by making clothes for the dolls.

Armstrong’s daughter is arranging for the dolls to be given away through her church.

Golden has already decided to make more dolls for next Christmas, and plans to make some for the annual Fairlawn Auxiliary auction, she said.

Golden said she believes girls “are born with a mothering instinct. It’s such a comforting thing for a little girl to have a doll baby in her arms,” she said.

“I think every little girl has to practice, because she is going to become a mother.”

Golden said she knows what it is to have a small Christmas. The middle child of seven, her family didn’t have a lot. Her Baptist church would hold parties for children of the church, she said.

By providing these three dolls, Golden hopes three little girls will have a nice Christmas memory.