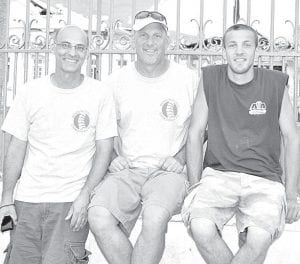 Mark Grime, Doug Bernath, and Doug’s son, Alex, from left, in front of the ruins of the Presidential palace in Port-au-Prince, Haiti, which, like much of Haiti’s capital city, was destroyed by an earthquake in January. The three Archbold men traveled to Haiti in June to perform missionary work at an orphanage.– courtesy photo

In the six months since the Jan. 12 earthquake in Haiti, little to nothing has been done to clear the debris and repair the damage.

“What you see on TV? It’s worse,” Mark Grime said.

“We were able to spend three to four hours in the back of a truck driving around Port-au-Prince. Noth- ing is happening,” said Doug Bernath.

In Port-au-Prince, Haiti’s capital, the two men said there are as many as a million homeless people living in makeshift tent cities in low-lying areas and on hillsides, areas that were considered uninhabitable before.

“There’s no cross ventilation” in the tent cities, and temperatures in the shelters can reach 120 to 150 degrees, Doug said.

What does Haiti need? 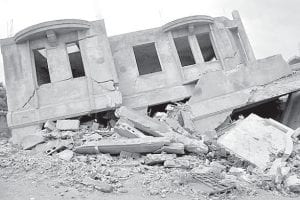 A building lies in ruins in Haiti months after an earthquake devastated the island nation. Three Archbold men traveled to the country and report little has been done to remove the rubble. People still live in makeshift tent cities, they said.–courtesy photo

The two Archbold men went on a mission trip to the Dominican Republic in February, and got a chance to visit the Haitian border area.

The two countries share the Caribbean island of Hispaniola.

There they saw a hospital on the Dominican side being emptied of its Haitian patients.

The Dominicans wanted the Haitians off their soil by Dominican Independence Day (Feb. 27).

Doug, Mark, and Doug’s son, Alex, arranged to travel to Haiti as part of a work team with the Northwoods Community Church, Peoria, Ill., the week of June 15-22.

Steve Shaffer, a former pastor at Archbold Evangelical Church, is an executive pastor at Northwoods. He maintains some ties to Archbold.

Doug and Mark said Northwoods was able to raise a significant amount of money for Haitian earthquake relief.

But the two cautioned against sending money to just any group allegedly doing relief work. They said as much as 80% of donations goes to “administrative” costs.

Instead, Northwoods looked to partner with an organization that was already well-established, and found the Loyal Oak Community Chapel Mission Orphanage.

Located about 8 1/2 miles northeast of the capital, the orphanage, which serves 105 children, had a wall collapse, along with the ends of some two-story buildings.

The most significant need for the orphanage was a boys dormitory building.

There was no electrical service in the dormitories. That was installed, along with two additional water purification systems.

Doug said as the volunteers worked, Haitians would watch and learn what they were doing.

“If you were mixing concrete, they would come up and take the shovel from you and mix it themselves,” he said.

Even young children are willing to learn building skills, he said.

“
When you see the kids, you just want to do something for them,” Mark said.

But actually, the children in the orphanages could be the lucky ones.

In many cases, they’re turned over to orphanages by their families because the families simply can’t support them.

In the orphanage, they have shelter, two to three square meals a day, and some education.

Mark said by helping 105 kids in the orphanage, they have a better chance to reach adulthood. The next step is to integrate the children into Haitian society.

Doug said the Haitian situation could provide opportunities for local persons to be of service in that country, but June in Haiti “is not the most pleasant experience.”

Temperatures can hit 100 degrees, even at night. Grime and the Bernaths slept under a mosquito net, which doesn’t allow any airflow.

“If you can call it sleep,” Alex said.

Doug said Alex spent a day and a half installing a new tin roof on the new boys dormitory, in 110-degree heat.

Because there’s no heavy earth-moving equipment in Haiti, everything has to be done by hand.

Each person on the team needs to drink 1 to 1 1/2 gallons of water a day to stay hydrated.

Then there’s the smell.

Doug said when working in the Third World you don’t expect to complete anything.

“You just move it along for the next team.”

But there was a case where the men felt God may have had a hand.

The boys from the orphanage had been living in tents on the lawn. Once the tin roof was complete, the boys were moved into the dormitory.

About 45 minutes later a tropical storm came through, destroying the tents.