Group Home Is Not A Group Home, Says Planning Commission 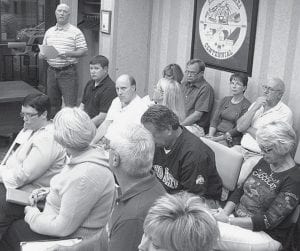 Brad Grime, standing, a resident of Lawrence Lane, questions members of the Archbold Planning Commission about a residential facility for the developmentally disabled, planned for Sylvanus Street, during the commission’s Monday night, Sept. 15, meeting. Seated are other homeowners from the neighborhood. The commission decided the facility did not meet the definition of a group home, allowing the project to proceed as a single-family residence.- photo by David Pugh

Archbold Planning Commission decided it didn’t need to make a decision about a group home project on Sylvanus Street, because it’s not a group home.

Fulfilling Housing, Inc., a non-profit corporation that is an offshoot of the Filling Home of Mercy, Napoleon, plans to construct a four-bedroom, two-bath home for four persons with developmental disabilities such as mental retardation on Sylvanus Street.

Carma Grime, village zoning inspector, told members of the commission and 17 neighbors in attendance that the project was explained to her as a group home. Because the Sylvanus street neighborhood is zoned R- 2, medium-density residential, and because a group home requires the conditional use permit in an R-2 residential area, the commission scheduled the Monday night, Sept. 15, meeting.

Later, C. Grime said she learned there only would be four persons living in the residence.

One of the definitions in the village zoning code states that a single-family residence can be a group of up to five unrelated people, living as one housekeeping unit. 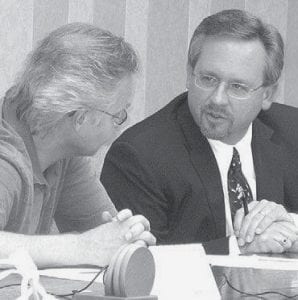 Denny Meyers, left, and Jim Wyse, members of the Archbold Planning Commission, discuss whether or not a conditional use permit is required for a home for developmentally disabled persons, including those with mental retardation, on Sylvanus Street.- photo by David Pugh

By the definition, Fulfilling Housing’s group home, is, in fact, a single-family home, which does not require a conditional use permit.

Jim Wyse, Archbold mayor and member of the commission, said he could have cancelled the Monday night meeting once it was determined a conditional use permit wasn’t necessary. Instead, he decided to allow the meeting to continue to provide area residents with as much information as possible.

If a permit were required, the commission could recommend Archbold Village Council grant the permit. It cannot issue a permit on its own.

Richard Chase, an attorney representing Fulfilling Housing, said the organization has made an application for grant funding for three such singlefamily homes through the federal Department of Housing and Urban Development. Two will be built in Napoleon, and one in Archbold.

Paul Ortman, director of the Filling Home, said if the grant comes through, Fulfilling Housing would build and own the home. County boards of mental retardation would select the residents.

The county board would also provide whatever support the residents need. That could range from as little as one hour a month, to someone at the home daily.

B. Grime said the group didn’t do its due diligence, because they didn’t knock on neighbors’ doors explaining the project. Chase said they were not required to.

Marv Miller, neighborhood resident, said covenants in the deeds to the properties won’t allow him to build a playhouse in his back yard without the approval of other property owners- how can Fulfilling build its facility without permission.

Wyse said the neighborhood covenants were outside the jurisdiction of the commission.

B. Grime said while the Fulfi lling home project may meet the village definition of a singlefamily home, it didn’t meet his.

He noted the residents of the home would pay rent; others in the neighborhood own their homes.

Dennis Howell, village administrator, said the definition had been in the village zoning code since it was originally adopted in 1966, and the same definition could be found in many other zoning codes.

Those in attendance talked about a meeting with officials from Lugbill Brothers, Inc. Fulfi lling Home officials were not invited to the meeting.

B. Grime said residents were told at the meeting that there would be eight residents living in the home.

Chase said if Fulfilling Housing representatives had been allowed to attend the meeting, they could have corrected the issues.

There also were concerns about whether there would be a full-time live-in person, called an operator, providing assistance to the residents, or if three people would handle three shifts at the home.

Ortman said if the residents opposed either, then technically, they could not hire private-duty nurses or home health aides if they need them.

Ortman was asked if, in a few years, Fulfilling would decide to place more residents in the home.

“There’s no way we can police that,” B. Grime said.

Ortman said there has to be a certain amount of trust.

“There is no guarantee, but our organization’s word, just about right up and down the line, has been good,” he said.

He said if there were more than five residents in the facility, then they would be out of compliance with the village zoning code, which would have consequences.

Miller told the board there were 16 concerned taxpayers in the room, vs. one organization.

Miller said Ortman cannot guarantee that there would not be an operator. The definition of a group home includes an operator. Based on that, Miller said the commission could stop the project.

“There are 16 families who spent a lot of money and pay a lot of taxes,” he said.

“Keep that in mind.”

Denny Meyers, commission member, said he was “trying to determine the chemistry” of the situation.

Speaking to Ortman, he said, “You want to be there. The people don’t want you there. Is this a good match?”

Chase said Fulfilling Housing’s application to HUD was for three homes. If the Archbold project was dropped, all three would be lost.

Mark Hagans, village solicitor, gave commission members several options for action, including determining the home was a group home, and then considering a permit. It was noted the commission had granted such permits in the past.

In the end, the commission ruled that because the Fulfilling Home project fit the definition of a single-family home, no conditional use permit was needed. As a result, the commission took no action.