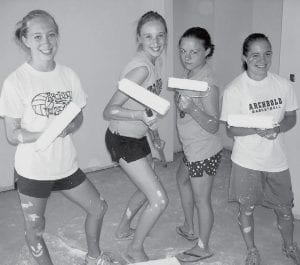 The building project started with the approximately 20 middle schoolers in the multi-denominational Groundbreakers youth group sponsored by the Archbold United Methodist Church. By the end, over 60 local youth joined the effort. In their first day on the job in mid-July, Kaihle Sauder, 15, left, and her twin sister, Elise, right, get messy and brandish paint rollers. The Sauders flank Haley Behhnfeldt, 14, second from left, in her third day helping, and Dakota Riehl, 14, who helped from day one, in April.- photo by Alicia Buckenmeyer

By now, many know the story of The Groundbreakers, a group of boys and girls who came to the aid of a friend by building his family a new house.

Over the summer, 63 boys and girls, with the help of a few adults, teamed up to demolish one old house and put up a new one in its place for their friend, Chandler Stevens, and his mother, Mary Austen.

But even the young people realized there was more to the job than that.

“That’s one of the smallest things we built.”

The other creations? New friendships and a stronger community.

Lisa Allison, an advisor of the youth group, said during the construction, “It’s bringing the community together.

“It’s just become a benefit to anyone who’s a part of it, and even those who aren’t,” Allison said.

Garrett Morton, 15, a member of Groundbreakers, said he hoped the project impacted the community.

Perhaps it will spur people to lend a hand to a neighbor who needs help, “even if it’s a tiny thing. Maybe they’ll just go do it,” he said.

to Mary and Chandler, was impacted by the project.

He said most adults would never have attempted such a task, in the name of “common sense.”

“These kids, their vision, it’s just amazing,” he said. “They see no ceiling, no walls, no windows.”

“It’s a huge thing to build a home,” Allison said.

“But in retrospect, it was very easy, because people just came and said, ‘I can help you,” Allison said.

“We had a lot of support,” Riehl said.

Kelsey Mosier, 14, said during the construction that while she had only volunteered twice, “I’m going to keep coming. I just feel like this is what God wants.”- Alicia Buckenmeyer