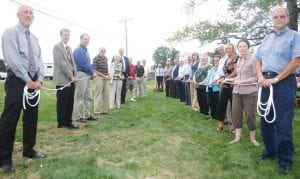 Top: Breaking ground for the rehabilitation center, the newest addition to Fairlawn Haven, Fairlawn officials recreated the original 1962 groundbreaking ceremony. Representatives of area churches, which combined to create Fairlawn, and other community members pulled ropes connected to an old plow, which was the same one used in the original ceremony 50 years ago. Left: Steve Ringenberg, Fairlawn chief executive officer, guides the plow.– photos by David Pugh

The newest addition to the Fairlawn Haven Retirement Campus will be known as The Rupp Rehabilitation Neighborhood, said Neal Beck, chairman of the Fairlawn board.

Speaking during a groundbreaking ceremony, Thursday, Sept. 13, for a new, $5.5-million rehabilitation center, Beck identified the Bill and Melinda Rupp Foundation as the lead donor to the project.

Fairlawn raised $1.5 million in donations in six months. The remaining $4 million was raised through a sale of bonds.

“This project was made possible due to the generosity of so many of you, and those in our community,” he said.

“We are humbled by the outpouring this community shows in caring for our older adults.

“Many donors made pledges to help us reach our goal, and today, we would like to honor our lead donor, the Bill and Melinda Rupp Foundation.

“Melinda is passionate about Fairlawn’s mission of offering an inviting homelike setting with quality care for older area adults. 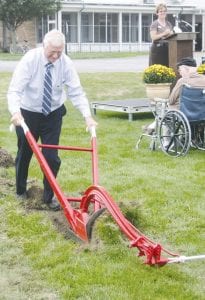 “In honor of all you and Bill have done for the Archbold community, we plan to name this new addition The Rupp Rehabilitation Neighborhood,” Beck said.

Fairlawn plans to add space for 12 bedrooms for people who will stay for a short period of time to rehabilitate from illness, surgery, or other medical situations.

As part of that addition, space in the current Fairlawn building will be remodeled to create additional space for speech, physical, and occupational therapy.

Previously announced plans call for construction to start this month, with completion set for August 2013.

Once inspections by relevant state agencies are complete, the rehabilitation unit is expected to begin accepting patients by late fall 2013 or early 2014.

In his speech, Beck said the Fairlawn board has created a master plan for renovating Fairlawn Haven to meet the needs of families and loved ones, with the finest care, in a place comfortable and welcoming to all.

“When completed, Fairlawn Haven will have neighborhoods made up of 12 to 20 residents.,” he said.

“Each neighborhood will have its own entrance, kitchen and dining area, living area, and porch, with private bedrooms, much like our own homes which we hold dear.”

The bonds to finance the Fairlawn project were sold through the Village of Archbold.

Under state law, the bonds are tax-exempt, and the village is not liable for any of the debt.

Dennis Howell, Archbold village administrator, said earlier, “There is absolutely no risk to the village in doing this.”

The Farmers & Merchants State Bank, Archbold, purchased the bonds as an investment.

Long ropes were attached to a moldboard plow. Representatives of the churches that initially created Fairlawn and others pulled on the ropes, while Steve Ringenberg, Fairlawn chief executive officer, guided the plow.

Just like the original event, pulling the plow symbolized Archbold citizens pulling together to accomplish a goal.