Grisier’s Persians Are The Cat’s Meow

by Andrea Kelly
Special to the Buckeye

Sabrina Grisier and her Persian cats, which she breeds and shows in competitions throughout Indiana, Ohio, and Michigan. Left: Grisier, with one of her cats, Miss Scarlett Red ‘Hara, and another popular feline. Right: Grisier with Miz Behavin’ and Whispering Willow, with some of their show ribbons.– courtesy photos

In this case, however, the girls are her Persian cats, which she shows and breeds.

Persian cats have a flat face, small ears on the sides of their heads, a stocky body with short legs, and piles of fluffy hair.

They are a very popular show breed.

Grisier thought she would like to breed Persians, so she did a lot of research and put feelers out for a good breeding cat. 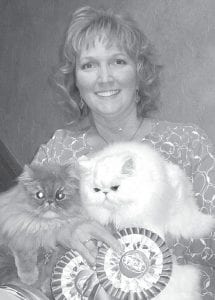 Finally, the call came. A woman in St. Louis, Mo., had a good quality black Persian kitten if Grisier wanted it.

Three months before, Grisier’s daughter, Chelsey, had been diagnosed with cancer. Grisier thought the timing was bad, but Chelsey urged her to go get the kitten. So she got Truffles.

Grisier didn’t begin breeding the kitten until after her daughter died in December 2007.

One day Grisier decided she needed to do something new, so she began breeding the cat.

“I have some wonderful people who have mentored me,” she said. She read a lot of books on the subject as well.

She said entering her cats in shows would tell her if they were quality breeding animals.

Her two cats earned champion status at that first show, and Grisier was hooked.

Her cats are registered with the Cat Fanciers’ Association (CFA), one of two main cat-showing associations.

Most of her shows are in Ohio, Michigan, and Indiana, and last a day or two.

When first arriving at a show, a person and their cat are “benched.” They are given 44 inches of space at a long table.

The cat’s cage is set up along with food, water, litter, and a decorative table cover.

Spectators and other breeders look over the cats, so it is important that they are presented well.

Each cat has a grooming area. Grooming takes the most time.

“It’s a beauty contest,” she said.

The cats are shampooed with whitening or reddening shampoo, depending on their coloring, as well as extra volume shampoo.

They are blown dry, sprayed with an anti-static spray, and their fur is blown out until the cats are incredibly fluffy.

Powder is put around their eyes to eliminate staining.

Their facial fur is sculpted to make their eyes look bigger.

When the show begins, each cat is given a number.

They are called into a ring, which has a long middle table for the judge, and cages are set up in a U-shape around the table.

When a cat’s number is called, the owner drapes the cat over their arm so as not to flatten the fur, walks silently into the ring, puts the cat in a cage, and walks out.

The animal is judged on bone structure, ears, fur, eye color, and how evenly their weight is spread.

It helps if they’re very longhaired and have an entertaining personality.

The cats go through the process twice.

Each winner receives a rosette, a small wreath of flowers, as a prize. They compete against their own breed, and then other cats.

Cats get one point for every cat they beat. A cat that earns over 200 points in a season has “championed.”

Seasons start on the first of May of each year.

Three of Grisier’s cats, Miz, Willow, and Scarlett, have championed.

Grisier shows cats she has bred herself.

She operates a small “cattery,” the official name for a cat-breeding establishment. She and her girls are registered with the CFA under the cattery name SabrinaMews.

Her cattery consists of her four Persians. She is not interested in expanding the operation.

“I want quality, not quantity,” she said.

She has sold kittens to people as far as Maine, Colorado, and Illinois, and as close as Toledo and Columbus.

She, like many breeders, is selective to whom she sells her kittens.

A Persian is “a loving, docile little animal that takes a lot of care with the hair,” she said.

She wants the kittens to go to someone who will put in the time to care for them properly.

Grisier enjoys the camaraderie within the cat crowd. She’s met people from Nevada, Alabama, Egypt, and Germany through cat shows.

“I’ve met so many wonderful people.”