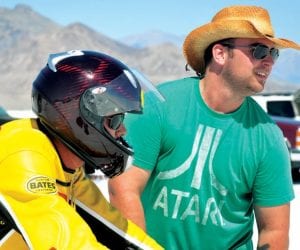 Christian Grisier, an Archbold native, left, and Elliot England, formerly of Wauseon, wait on the starting line at the Bonneville Salt Flats to make their run. Grisier rode England’s modified motorcycle to a speed of 136.110 miles per hour. Grisier describes the experience as “a violent solitude… it feels like you’re on another planet.”– courtesy photo

(Editor’s Note:
This is the

second of a two-part series.
Christian Grisier describes
racing his motorcycle across
the Bonneville Salt Flats in
Utah.)

For Archbold native Christian Grisier, it had all come down to one moment.

He had just been given the signal to start his one-way race across the Bonneville Salt Flats in western Utah.

Countless hours were spent working with his friend, Elliot England, modifying a two-cylinder English motorcycle. Untold dollars were spent on high-performance parts. And there was a 37-hour, straight-through drive to Bonneville.

Wearing a leather racing suit borrowed from a Canadian racer, with an American flag that had flown over Iraq stuffed inside, Grisier released the clutch, and the bike reacted.

“I thought I took off nice and slow, very controlled,” Grisier said. Others said it was like he was shot from a gun.

“First two gears, I was very careful, didn’t open up the throttle. Third, gear, I opened the sucker up.”

The course, 100 feet wide and miles long, is marked with flags a quarter-mile apart.

“At the three-quarter mile mark, I shifted into fifth gear, the final gear, and I was already going 120 miles an hour.

The team had installed high-ratio gears on the motorcycle to increase its top speed, but they couldn’t test the bike. Was top gear too high? Did the engine make enough power to accelerate in the higher gear?

Grisier got his answer.

“When I shifted into fifth gear at three-quarters of a mile, the thing pulled like a freight train. I crossed the one-mile mark having hit my top speed.”

The bike was stable; he tucked his body tight against the frame and gas tank, because the wind was trying to pull him off.

“I held that, and went through the quickest mile of my life,” he said.

He had the option to pull off the course after two miles, “but I said, ‘we’re only doing this once, I’m going for three.’”

Grisier said he glanced down, and the engine tachometer was off the scale on the high side. The speedometer, which errs on the high side, was buried at 140 miles an hour.

“Everything blurs. All the individual lines in the salt from the previous tires all blur into white, the sky and the clouds blur into blue, and then every seven seconds, I saw orange markers going by.

“It was extreme tunnel vision. There’s 20,000 people to my left a quarter-mile away, watching. They just disappeared. I couldn’t see them.

“It’s a violent solitude. There’s nothing out there. You’re completely alone, miles away from everybody, going as fast as you can. It feels like you’re on another planet.”

At top speed, Grisier said the noise is “a deafening silence. You don’t hear the engine anymore, and that’s a loud engine. You hear the humming of the wind in your helmet, but it’s not like a windy day. I don’t know how to describe it… it’s just a weird hum.”

“You don’t think anymore; you just freeze completely with that throttle buried. At that point, I stopped worrying about what could go wrong and just focused on keeping it as stable as possible.”

At the three-mile mark, Grisier released the throttle and pulled in the clutch. He was afraid to use the brakes, so it took a mile to slow down.

“I crossed the four-mile mark, and I just erupted in emotion. I started balling my eyes out, crying and laughing and confused and happy… everything that had built up, all that anticipation, let loose. Holy crap, we did it.

When they got their offi cial timing ticket, “it said 136.110 miles per hour, averaged between mile one and mile two.

“We bested our goals, I got my class D racing license, and I’m a member of the 130 club, all on my rookie run, and the tuning run for the bike.”

They only made one run.

“That was all we needed,” Grisier said.

But once the land speed record racing bug bites, it bites hard.

More power for the engine.

Drilling holes in the bike to reduce weight.

A custom racing gas tank is being hand-made by a craftsman in England.

Their racing class is limited to a 1,000 cubic-centimeter, parallel twin-cylinder engine motorcycle running on gasoline, without windcheating fairings. The class record is 153.2 mph.

“We think we’re on the right track to actually beat that next year,” Grisier said.