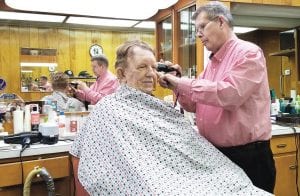 Paul Harr, Bryan, gets a haircut from Greg Grime, owner of the Archbold Barber Shop. Grime has owned and operated the shop in downtown Archbold since 1968. It is one of the oldest continuous-operating barbershops in the state of Ohio.– photo by Pam Graber

Without fanfare or hoopla, Greg Grime marked 50 years of ownership of an Archbold mainstay– the Archbold Barber Shop.

“I purchased the business the day before Christmas in 1968,” Grime said.

“I did a year of Barber College, then a three-year apprenticeship with Dale Schachterley in Holland before coming back to my hometown and buying the shop.

“Gary Christman worked for Marv (Fether) and Fred (Grime), and I bought it from him.

“I used to get my hair cut here as a kid, and the barbers here in town were always very kind and interested in what was going on in my life.

“Growing up, my dad was always pretty insistent that I learn a trade, so when it came time to decide what I might like to do, as a junior in high school, I thought, ‘What about barbering?’

“Now, my mother wanted me to be a priest, but that wasn’t in the cards.

“My granddad thought it would be great, and when my dad heard about it, he was just wild for it.”

After touring the Barber College on Superior Street in Toledo, Grime was accepted as a student following his high school graduation in 1965.

“You go to barber school about a year, and then it’s continuing education,” he said.

“I stayed with my aunt down there. She didn’t live far from the college. That year in barber school was probably the best year I had, other than the year I got married.

“At the time I went to Barber College, they used to have an apprenticeship program for barbers.

“They don’t anymore, but I really learned a lot. One of the things I liked about Dale– he was incredibly honest. I never heard him get mad, never heard him tell a dirty story in the three years I worked for him.”

What have been the biggest changes in the last 50 years?

“I think the hair. We started off cutting everything really short, and then everybody went long. Now, we’re back to most people wanting short,” he said.

“They told us at barber school that there’s really only three different haircuts – long, medium, and short. Everything we do is just variations on those three.”

“Over the years, we’ve had a lot of old men come in who were kind of cantankerous and grumpy. But as I got to know them they turned out to be the kindest men, and when you see their names in the obituaries, your knees go kind of weak.”

The shop has changed some, too. Not a lot, but some.

He still greets every customer by name as they come through the door, and when they are in his chair they are treated with respect and gentle care.

“This is the fourth or fifth oldest working barbershop in Ohio,” Grime proudly stated.

“It’s a tad over 100 years that this has been a barbershop in this building.

“Before that, the F&M Bank got its start right here.

“When they moved to the building there on the corner where the taco shop is (Taqueria Restaurant El Mason Del Taco), this was turned into a barbershop.

“At one time, we had people cutting hair at all four chairs. Now, it’s just me and Lynn (Seiler), my Tuesday girl,” he said.

“We never really have two days alike. Most of my customers now are walk-ins. We still do some appointments, but we do a real good walk-in trade.”

While the shop itself is a mainstay of the main street in downtown Archbold, it’s the people that make his job a joy, he said.

“Years ago, one of my customers told me, ‘You’re not in the barbering business, Greg. You’re in the people business. Barbering comes second or third down the line.’ I really believe that,” he said.

“The whole key is if you’re ready to roll up your sleeves and get to work.

“My granddad used to tell me, ‘Never tell anyone you’re looking for a job. Tell them you’re ready to get to work.’

“There’s a difference there, isn’t there?”

Most people who have worked the same job for a long time are chomping at the bit to enter retirement, but not Grime, who is 71.

Fifty years in, he still says, with conviction, “I’ve never had a day that I hated to come to work.”