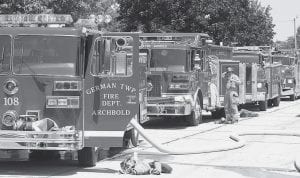 A fire in a Jane Court apartment did approximately $35,000 in damage and claimed the life of a family dog Sunday, July 6.

Russ Wyse, Archbold Fire Department assistant chief, said a grease fire started in the kitchen at 12 Jane Court, apartment No. 1, the residence of Amy Mock and her daughter.

Wyse said the doors and windows were closed, and the family was outside. Family members heard popping and cracking noises, opened the kitchen door on the south side of the building, and discovered the fire.

Archbold Fire Departed was called to the scene at 12:03 pm.

Wyse, who was in charge of the fire scene, said the first crew to arrive went into the apartment through the kitchen door, and using a 1 1/2-inch line, knocked down the flames.

"They knocked it down real quick," Wyse said.

A second crew at the front door was ready to go in, and a third crew was on the roof, ready to cut ventilation holes; but the first crew reported the fire was out, so the second crew and ventilation were not needed.

The kitchen suffered fire damage, and there was smoke and heat damage to the rest of the apartment. Neither of the other two apartments in the building were damaged.

Wyse said the building is owned by Scott Lantz, Wauseon.