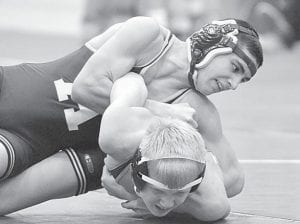 Damian Short records a 15-0 technical fall over his Liberty Center opponent, Thursday, Dec. 20. He also recorded a pin over his Montpelier opponent.– photo by Mario Gomez

The Blue and Gold were helped to an early lead as the Tigers forfeited the first three weight classes.

The much-anticipated match of the evening was in the 138-lb. weight class as Archbold’s Kenny Price battled returning state placer Zach Niner.

This time, Niner defeated Price with a second-period fall.

Liberty Center captured the next three weight classes to close out scoring and give Archbold the victory.

“It’s ok to give him one; you just can’t give him that second one. Kenny got caught shooting with his arm out there at the end.

“I’ll be anxious to see when Kenny adjusts to wrestling him.”

Archbold cruised to an easy victory in its second match of the evening, recording 11 pins.

Travis Jaramillo (220 lbs.) received a forfeit to cap the scoring.

“It was nice to see that we wrestled aggressively against both squads,” said Becher. “The worst thing for most of our guys was getting their weight down this last time before we get the extra two pounds.”

The varsity begins a long break before returning to competition.

“We haven’t been pushing real hard,” said Becher. “We’ve been running pretty hard to stay in shape, but I told them after we get back from break we’ll hit it real hard.

“We’ll give them a few days rest over the holidays. We do our team competitions, a few fun days for them, and then hit it hard when we get back from Christmas break.”