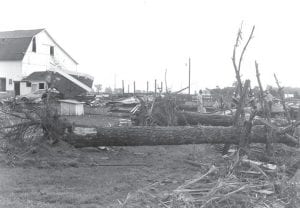 Uprooted trees were a minor concern for Dean Smucker, whose hog barn stood past these felled giants slightly to the right, where volunteers cleared out rubble. One barn, at left, still stood, while the free-stall barn located next to it, center, was leveled.– photos from the Archbold Buckeye archives 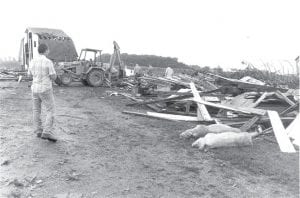 Two dead hogs from the Smucker farm, right, were the only known fatalities from the Sunday, July 12, 1992 twister that roared through Pettisville. A busy Dean Smucker, left, heads back to check on an underground water leak that interrupted the supply to the cattle barn. 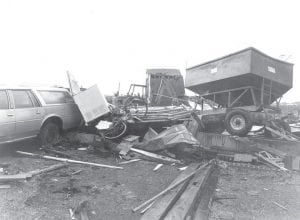 This collection rested in the middle of the Smucker yard. It included the family station wagon, a chest freezer, a bicycle, a grain wagon, and a variety of unidentifiable debris. 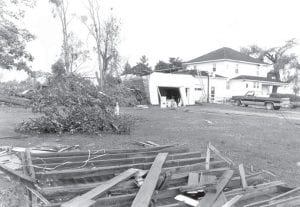 In view of two flattened barns, Smucker considered his home to have sustained only minor damage. 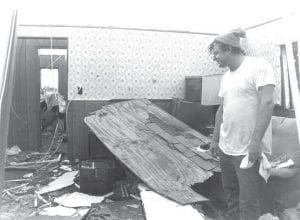 Raymond Leith surveys his former living room in apartment 15, Pettisville. He dove through the doorway, left, Sunday evening, July 12, 1992, barely missing a window that flew by. 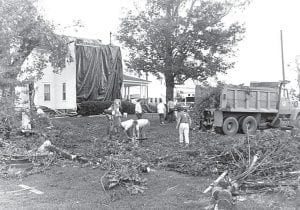 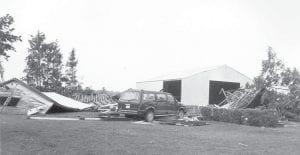 Richard Rufenacht’s minivan, parked on top of the folded garage, was originally parked inside of the garage, at the right of those bushes where only the foundation littered with trees remains. Left of the van is the tool shed that stood behind the garage next to the metal building still standing. 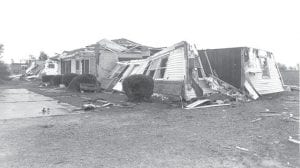 This eastward view shows a back row of apartments that crumbled in the path of the tornado. One unit had eight persons in the northeast corner of the living room while walls collapsed. 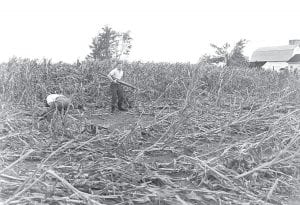 Ivan Short, bending down at left, and Bruce Rupp, center, pick up scattered trash in the cornfield west of the Rufenacht home on the north side of St. Rt. 2. 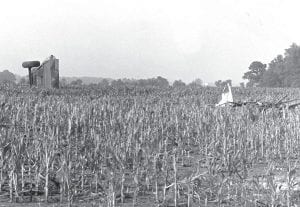 This stripped cornfield littered with a grain wagon, left, and metal sheeting, right, was north and east of the Schroeder home. 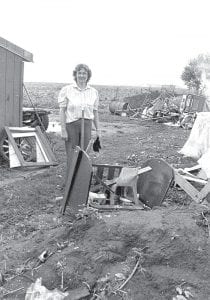 Esther Sauder stands in front of her broken wooden cradle that rocked a grandchild just a week earlier. It was one of many possessions that Sauder found scattered about by the twister that took her home and business. 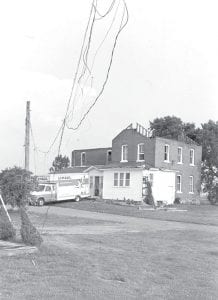 Guy and Lori Schroeder moved out furniture all day Monday, July 13, 1992, from their damaged home, pictured from the backyard. Set back on a long lane on the north side of St. Rt. 2, it was the second property in the direct path of the tornado. 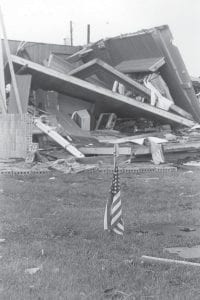 While the flag still stands, the building behind it doesn’t. It was once occupied by Ed Bracken, a Pettisville teacher who was not at home at the time the tornado took down his apartment. 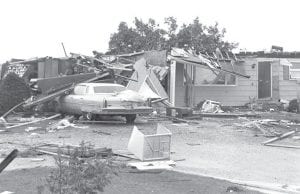 The Country Paint Store, Pettisville, Sunday evening, July 12, 1992, after it was struck by the tornado. While the house at right was totaled, the paint cans at left are still lined up on the shelves. 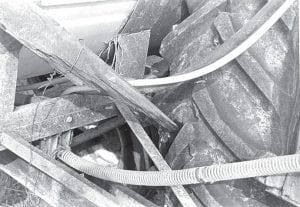 A piece of barn siding pierced a tractor tire like a spear tossed to kill. The tractor was parked southeast of the flattened Schroeder barn. Even a forceful tug wouldn’t budge the wooden lance. 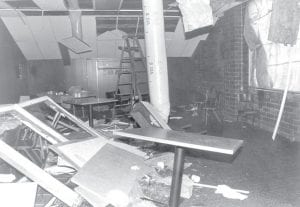 Das Essen Haus upstairs window, at left, once was in the open cavity at right, covered with tarp. Except for a second blownout window, roof damage, and insulation scattered throughout the restaurant, this was the only damage sustained by the Pettisville restaurant. 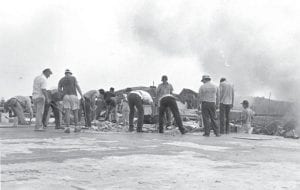 Volunteers sweep the debris from the first floor of the Orval and Esther Sauder home. It was all that remained after a tornado and cleanup crews hit the home. 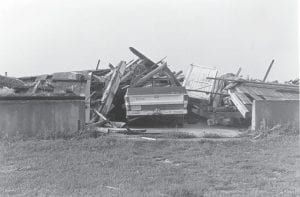 This once was the Schroeder barn northwest of their home. It collapsed on top of their pickup, which was still covered Monday evening, July 13, 1992, with wooden siding, beams, and bales of straw. 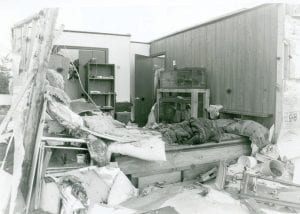 A few fish were still circling quietly in the aquariums against the wall, center, in this apartment Monday morning, July 13, 1992. They were the only sign that this scene of destruction was once someone’s home. 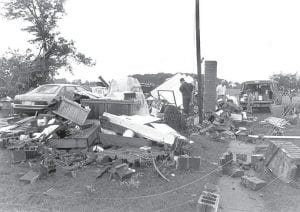 This pile of rubble behind the Virgil Augustine home was a garage once. While the garage moved east, or to the left of the photo, debris from the west pelted the car, left, that never moved its position from inside the garage that disappeared. 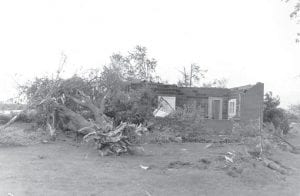 This was the most severely damaged Pettisville home on the south side of St. Rt. 2. It was one of nine homes between the demolished apartments and Das Essen Haus restaurant. 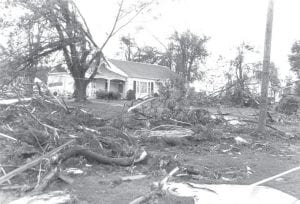 Tangled power lines and tree wreckage littered the lawn of this Pettisville home on the south side of State Route 2, east of Co. Rd. 19.