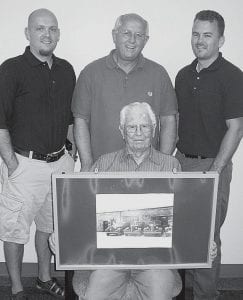 For three generations of Bauses who operate Car 1, an Archbold used car dealership, working with family can’t be beat. Ed Baus, seated, holds a picture of the family dealership taken in 1937, when just two cars were displayed in the lot compared to the 30-40 now. I doubt if they sold more than 20 or 25 cars a year,” said Ed. “There were still a lot of people with the horse and buggy.” Surrounding him are grandsons Chad, left, and Aaron, right, and son Larry.- photo by Alicia Buckenmeyer

Even at 90, Ed Baus, Archbold, still is in the family automobile business.

He sold Nofzinger Motor Sales to his son and daughterin law, Larry and Eileen, in 1986, originally located on E. Mechanic St., Archbold. Today, Ed retrieves the cars to be sold at the family used car dealership, now on S. Defiance St.

When he walks through the doors, he’s greeted by Larry, and grandsons, Chad and Aaron, partial owners.

There have been Bauses at the family dealership since 1927.

There are “not too many businesses that you can walk in to and see three generations at the same time,” said Larry.

“Let me tell you, he was a go-getter,” said Ed about CJ. Even during the Great Depression and World War II, when metals and rubber were scarce, Ed said, CJ helped anyone who came to him.

When Ed’s youngest son Larry was old enough in about 1981, Ed passed along CJ’s knowledge and sales savvy.

Larry then taught his own sons, and the business continues.

“For me,” said Chad, “there are great things about working with family.”

Those great things outweigh the negatives.

“I ate all my profits,” said Aaron.

As they grew older, they took on responsibility. Aaron, the youngest, began selling, helping his dad while on college breaks.

The family sold their Pontiac and GMC business, but couldn’t stay away from selling vehicles.

In fact, Larry told Aaron, “I still say it was your idea to start this.”

The idea, starting a used car dealership in a town with four new car dealerships, led them to open Car 1 in March 1999. Its first location was “the same (East Mechanic Street) building that my grandpa started in,” said Larry.

Working for the dealership wasn’t a family expectation. Chad married a girl from Nashville, Tenn., and moved there to work in the Christian music industry.

They lived there seven years before returning in March 2001, when Chad became a partial owner.

Now, each family member has his own role. Aaron buys the cars, Chad sells them, Larry helps sell, and Ed- well, ask Ed what he does.

“I do the things nobody else wants to do,” he said

“They send me away so much I think they’re trying to get rid of me,” Ed jokes.

The Bauses are happy they work in a family business environment.

“Who gets to work with their kids the way I do?” said Larry.

“I think we can all get sick of each other,” said Chad.

Still, “if we’re having one of those days when we’re getting on each other’s nerves, I can compare that to the impersonal corporate” life in Nashville.

“We both worked for other people and chose to come back to this,” said Chad about himself and Aaron.

The family hopes to “have a business that can continue to grow in Archbold,” said Larry.

“Don’t plan on selling it. Not this one.”

Still, the far future may depend on others beyond themselves.

“Chad has two sons,” said Aaron. “It would totally be up to them.”

The boys still have plenty of time to decide. Daniel and Levi are only ages six and five, respectively.

Some days, Chad’s boys talk about working at Car 1;
other times, they dream of other things. Chad will let his sons explore other
options. “I’m not going to discourage that if they want to try something else,”
he said.