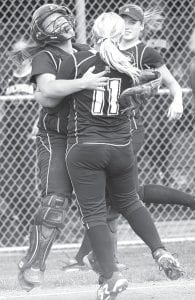 Catcher Ruth Beck and pitcher Hanna Allison celebrate after the Streaks slipped past Evergreen 4-3 in the Div. III regional softball semifinal, Wednesday, May 23. Cassidy Wyse, in the background, fielded a ground ball and got the third out in the seventh to prevent the Vikings from tying the score.– photo by Mary Huber

Archbold met league rival Evergreen with a spot in the “Elite Eight” on the line and won 4-3, Wednesday, May 23, in a Division III regional semifinal softball game at Liberty Center.

The game was scoreless headed into the top of the sixth inning.

Evergreen had runners on second and third bases with one out. Hanna Allison, Blue Streak pitcher, fielded a ground ball to the mound and retired Taylor Langenderfer at first base.

The Streaks then elected to intentionally walk Lesley Ducat to load the bases with two outs. The strategy worked as another grounder to Allison got Archbold out of the jam.

The Streaks got a perfect bunt single from Cassidy Williams to start the bottom of the sixth. With one out, Becca Gerig doubled, advancing Williams to third.

The Vikings elected to intentionally walk Chelsea Goebel to pitch to Cassidy Wyse.

Wyse foiled the strategy by depositing the first Ducat offering over the fence for a grand slam home run and a 4-0 lead.

Cassidy Wyse grins from ear to ear and heads home after hitting a grand slam home run in the sixth inning to put AHS ahead 4-0 against Evergreen.– photo by Mary Huber

The Vikings did not go away quietly in the seventh. With two outs and a runner at first, the Vikes applied their own pressure on the Streak defense.

A single by Kenya Keller, her fourth hit of the game, put two runners onboard. A chopper to the mound led to an infield single, which scored Keller.

Another infield single, followed by a Streak error, led to two more Viking runs, and suddenly it was 4-3 with runners on second and third.

Wyse fielded a ground ball and stepped on third base to retire the Vikings and give Archbold the win.

“I am relieved that we were able to finally get out of the seventh inning,” said Joe Frank, AHS head coach. “I didn’t think we were ever going to get the last out.

“It looked like we might get out of it with no runs, but a close call at first base went the other way, and all of a sudden, they had some life.

“We didn’t execute defensively in the seventh inning, but a lot of credit goes to Evergreen for putting pressure on us.

“Obviously, the big blow of the night was Cassidy Wyse’s grand slam. We weren’t able to mount much offense against Ducat up to that point in time, and we were fortunate enough to take advantage.

“Cassidy Williams had a huge bunt single to start the inning, and it just kind of snowballed from there.

“We are very excited to reach the “Elite Eight,” and look forward to competing for a state tourney berth against Milan Edison, the number one team in the state.”

Trust only movement. Life happens at the level of events, not of words. Trust movement.–Alfred Adler