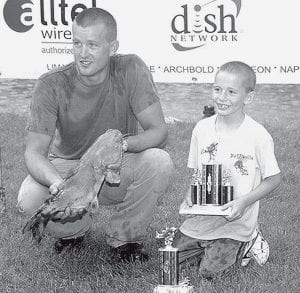 Courtney Miller, left, coordinator of the Pettisville Friendship Days Fishing Derby, holds the 6 pound, 2 1/2 ounce catfish that Stetson Aeschliman, Pettiville, caught. Aeschliman’s fish earned him both the top prize in the kindergarten through third grade division, and the title of grand champion. Miller said the night before the event, the Pettisville park pond is stocked with 100 hungry catfish; 30 to 40 were caught this year. “Some real monsters came out of there,” he said.- courtesy photo