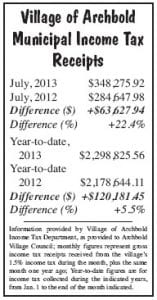 Speaking to village council during its Monday, Aug. 5 meeting, Howell said the July tax collection was large, pushing total collections for the year 5.5% higher than the same seven months in 2012.

In 2012, the village municipal income tax raised about $3.7 million, which is allocated to capital projects throughout the village.

The all-time record of the municipal income tax was set in 2006. That year, the 1.5% tax on wages and corporate profits topped $4.8 million.

During a short meeting, councilmen approved the first change order for the Lindau Street reconstruction project.

Because council opted to cancel the construction of some sidewalks in the neighborhood, the overall price was reduced by $19,334.34.

Howell said he saw “no reason not to renew the agreement. Ohio Gas is an excellent company to work with.”

In the meantime, the village is waiting on CenturyLink, a village telephone service provider, to move its cables from one pole to another on East Holland Street.

Toledo Edison has put a new pole in place. Now other utilities must move their cables to the new pole so the old pole can be removed and the area it occupies can be paved.

All councilmen were present.

The next council meeting is Monday, Aug. 19, 7 pm, in council chambers.–David Pugh