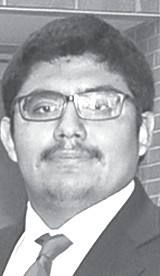 Anthony Gonzalez, a Four County Career Center student from Archbold, has been named an officer of the FCCC Business Professionals of America chapter for the 2017-18 school year.

Gonzalez will serve as the afternoon public relations officer.

He is a student in the software development & game design program.

There are more than 75 members of the chapter at Four County.

In Early days Archbold had six blacksmith shops and all were busy.