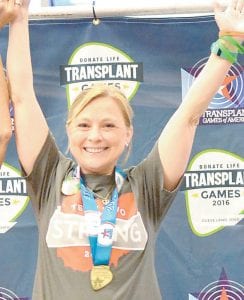 With a gold medal around her neck, Tonya Gomez raises her arms in victory. She won two gold medals at the 2016 Transplant Games of America.– courtesy photo

The Transplant Games are an Olympic-style event that takes place every two years.

It includes sporting events that range from team basketball and volleyball to darts, cornhole and trivia.

Competing in the women’s 40-49 age group, Gomez defeated a liver recipient from Connecticut in three sets in the gold medal match to win her first-ever Transplant Games gold medal.

Gomez snared her second gold in the doubles category. She competed with Columbus native Morgan Mersey.

Gomez, the focus of an April 4, 2015, Archbold Buckeye feature, was diagnosed with cystic fibrosis at nine months old. Gomez received a double lung transplant at the Cleveland Clinic in May 2004.

Cystic fibrosis is a genetic hereditary disorder affecting the exocrine glands. It causes the production of abnormally thick mucus, leading to the blockage of the pancreatic ducts, intestines, and bronchi and often resulting in respiratory infection.

Gomez first competed in the U.S. Transplant Games in 2006, where she brought home her first medal, a bronze, in the 1500-meter race-walk.

Since then, Gomez won eight medals but had yet to stand on the top of the podium as a gold medal winner.

After her win in singles badminton, Gomez was awarded her gold medal by her donor’s mother, Lorie Schwalenberg, whose 10-year-old son Adam was Tonya’s donor.

Gomez then presented the medal back to Lorie in a sign of appreciation for the donation Adam gave in his passing.

“I’ve presented my donor mom medals in the past, but to be able to give her a gold medal means so much more,” said Gomez.

“A gold medal would not have been possible without the unselfish decision of the family who, in a time of tragedy, made the decision to donate Adam’s organs to help others.”

Gomez, who also serves as a co-manager for Team Ohio, competed in table tennis, bocce, basketball and volleyball at the games.