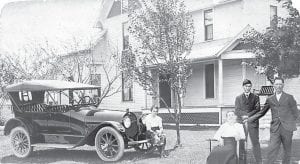 OLD PHOTO CORNER: A Franklin touring car, owned by Jacob Schaffner, Fayette, stands in front of his farmhouse on St. Rt. 66. Sitting on the bumper is Nina Schaffner. At right are Mary, Albert and Jacob Schaffner. – Antique photo from the collection of Gene Schaffner

Garrett Grime, 3, appears in a photograph getting his first lesson in firefighting at the annual fire department open house Sunday. Jake Grime and Kyle Brodbeck help hold the hose. Garrett is the son of Pete and Siri Grime.

Ken Cline, Archbold Area School superintendent, was not chosen by the Bryan City School Board to head its district.

Cline was one of three finalists for the Bryan school district superintendent position.

Things are slowly returning to normal for Shelly Conway, the former Archbold Elementary School teacher who traveled to New York to appear on national television.

Bev Emch, Kelly Hancock, and Abbey Damon are beginning a STOP the Violence chapter at AHS. It is a peer education approach to violence prevention with teens teaching teens.

Sisters Lindy and Jessica Sauder scored first and second places for their CC team, pacing the girls to a secondplace finish in the NWOAL.

Dencil Miller and Jack Rychener appear in a photograph grilling hamburgers Thursday at a tailgate party sponsored by the Pettisville FCCLA and American Legion Post 445.

A bicycle built for three, owned by Denton Yoder, appears in a photograph with him and his two children riding it.

A parcel of 32.19 acres of land owned by Mahlon Detter, 2 1/2 miles east of Archbold on West Barre Road with four acres in woods, sold at auction Saturday. It was purchased by Wilbur Detter, who bid $1,310 per acre.

Robert Ranzau, Ridgeville Corners, is a member of the marching band at BGSU. He is a junior and plays trombone.

Ricky and his father, Orville Fricke, admire a fawn that dad caught bare handed near his farm, according to a photograph. Upon advice from the game warden at Oakwood, Fricke turned the deer loose. After two days in captivity, it hadn’t eaten but did drink a little water.

When freed, at first it was bewildered. It started for a nearby woods, stopped, sniffed the air, changed directions, and darted out of sight.

Ed. J. Grime, in renewing his Buckeye subscription, recalled being a subscriber for over 50 years. He remembers when W.O. Taylor founded the newspaper in 1905 and started the Archbold Herald in 1865 in a building near the NYC Railroad owned by his father, the late Henry Grime.

The government urges citizens to be informed on the subjects of nuclear attack, home preparedness, effects of fallout, food, etc., necessary for survival in the event of attack or other disasters.

Central Mennonite Church will observe its 125th anniversary, Sunday, Oct. 16. For many years it was known as the Amish-Mennonite Church. It dates back to October 1835, when the first meeting of the congregation was held in the Christian Lauber 18×24 log cabin, which stood on Lauber Hill on US 20-A, northeast of Archbold.

Christian Beck (1798- 1882), who had been ordained a minister while in Switzerland, preached the first sermon in the Lauber cabin.

There are 17,680 motor vehicles registered in Fulton County.

An $80,000 addition of two 28×60 rooms will be constructed at Orchard Hills Country Club, west of Bryan.

Mutterings, by Orrin R. Taylor–Recently a leading manufacturer of brass slashed its TV advertising budget “because it didn’t pay off as well as newspapers and magazines.”… It may be true that few wives know how to make old-fashioned homemade bread, and few men know how to make and keep dough like father did.

The eastbound Twentieth Century Limited passenger train of the NYC Railroad was delayed over an hour in Stryker because the train struck and completely demolished a stalled automobile at the Silvernail crossing west of the village.

David Leupp sold his 80- acre farm, two miles south and one mile east of Pettisville, to Jacob Frey for $140 an acre.

The third water well drilled for the village of Stryker by D.D. Frey, on the Stuckey farm, northeast of town on Rt. 2, has proven to be a great producer.

A new high-strength alloy steel is being produced which will eliminate grinding of valves in automobiles and make the edge of farm mowers, plows, and scythes hold their edges much longer.

You are taking no chances when you buy Peter’s solid leather shoes at Rufenacht Haberdashery.–adv.

A yellow automobile stopped at Archbold Saturday afternoon, to advertise Johnson Thurston’s candidacy for circuit judge on the independent ticket. Several persons listened to him speak from a box on main street.

The most marvelous thing in the educational history of Ohio is the growth of our high schools. At the close of the Civil War we had 175 high schools. Ohio now has about 1,000 high schools and 73,317 pupils enrolled.

There will be plenty of potatoes, and they’ll be cheap to the consumer. The grower can make a good profit-raising them. Thanks to the Indian for teaching us to use potatoes.

While taking the men who burglarized the elevator office at Elmira to jail at Morenci early Wednesday morning, two of them broke from the sheriff and ran. They were recaptured after the officers emptied their revolvers at them.

D.T. Livengood broke his left arm above the wrist Friday. He fell from the top of a T&I car in Archbold. He was trimming trees at the time.

A barn on the Emmett Emerson farm burned by lightning in Gorham Township Sunday afternoon.

The Paulding Sugar Beet Co. is renting fields for sugar beet production in this vicinity. They have rented a patch from John Peter Dominique. The company intends to do its own planting.

Leland Grim, 15, son of Mr. and Mrs. John Grim, was stabbed in the back by a playmate Monday afternoon at Bryan. The wound required several stitches. The boys are in the sixth grade and the trouble occurred at recess.

Four of the five young men who burglarized the elevator office at Elmira and broke into businesses at West Unity and Alvordton are in jail at Bryan.

There is a grand opportunity for a young energetic man to go in business for himself spraying fruit trees. Every village needs such a service.

There will be a Democratic political rally in the Opera House, Thursday, Nov. 3. H.R. Dittmer, speaker, is a candidate for senator.

Stryker beat West Unity at football Sunday, 6-0. What a lot of bruises and limps for the honor.


More From Opinion Go To The Opinion Section