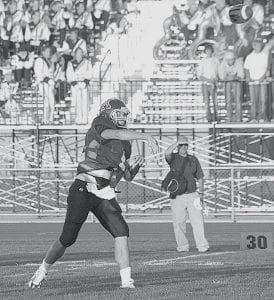 Gene Goering connected on a blistering 18 of 24 attempts for a record-setting 458 yards and five touchdowns, and Jimmy Dunning caught a record-setting 93-yard touchdown pass as Archbold coasted to a 48-27 Northwest Ohio Athletic League victory over visiting Bryan, Friday, Aug. 31.

“Archbold is just too good offensively, and Goering was too good tonight,” said Brian Arnold, BHS head coach. “I don’t know if I saw him miss an open receiver all night long.”

“It was a good win and we can enjoy it, but we have to get ready for an awfully good Fairview team,” said John Downey, AHS head coach.

It was an offensive show for AHS, with passing and receiving records falling every time the Streaks touched the ball. 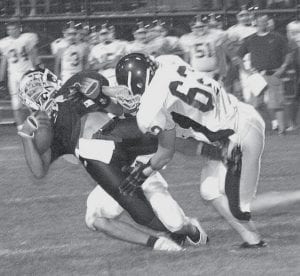 Jimmy Dunning, left, gets pulled down by a pair of Golden Bears. The AHS senior caught a record-setting 93-yard touchdown pass to also enter the Blue Streak record books.- photo by Scott Schultz

Goering, who has been rewriting the Archbold passing game, broke his single-game passing record set in 2006 against Wauseon, when he hit 26 of 33 for 362 yards.

The senior now holds nine of the top 10 passing records.

Goering also takes over the top spot for the most touchdown passes thrown in a game, with five.

The old record was held by Jim Rupp and Layne Thrasher. Rupp threw four touchdown passes against Edon and Swanton in 1961. Thrasher threw four TDs against Delta in 1987.

Heading into the game, Goering was tied with Rupp for the most touchdown passes in a career, with 30. Rupp played from 1959-61; his record of 30 touchdown passes is based solely on old newspaper statistics and may not be complete.

Archbold scored first, on a 27- yard run. The Bears came right back, as Caleb Armbruster scored on a 23-yard run to knot the score at 7 in the first quarter.

“Anytime anyone was open, Goering was right on the money,” said Arnold. “You can do anything you want defensively, but you just have to tip your hat to Goering. He was just absolutely on tonight.”

Dunning Gets In The Record Book

Both squads played an even second quarter, each scoring 14 points. But it was Dunning who would break the next record.

On the Streaks’ first possession of the second quarter, Goering connected with Dunning for a 12-yard pickup, but an Archbold penalty forced AHS back to its own 7-yard line.

Goering’s next pass was incomplete; Bryan’s defense then stopped Goering for no gain.

Facing third-and-31 on Archbold’s 7-yard line, Goering spotted Dunning and the race was on, as Dunning led all defenders on a 93-yard chase into the end zone.

The catch and pass is the longest in Archbold history, breaking the old record held by quarterback John Walther and receiver Tim Beck. Walther and Beck combined for an 89-yard touchdown in 1986 against Liberty Center.

Dunning also takes over the top spot in all-time single game receiving record book, with eight receptions for 191 yards. Curt Spotts held the old record; he hauled in five catches for 154 yards in a game against Evergreen in 1975.

The Bears tallied two more scores in the quarter, but still trailed 35-21. They didn’t score again until late in the fourth for the 48-27 final.

Once again Goering passed the wealth around, hitting six receivers. Jack Downey and Ben Brader were also the recipients of touchdown passes; Downey hauled in a 43-yarder, and Brader crossed the line from 17 yards out.

“I thought we did a good job throwing the ball,” said the AHS coach. “Bryan was trying to play man, and Gene (Goering) was getting good protection and was able to find the open guy.