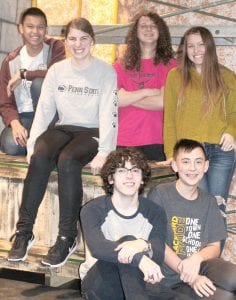 Members of the cast of the Pettisville High School production of “Godspell.” Front row, from left: Ryan Rufenacht, Mason Stickley. Back row: Jay-R Allison, Rebekah Holsopple, Birch Baer, Bekah Liechty. Not pictured: Detric Yoder. All are seniors except for Stickley and Allison, who are freshmen. The musical opens Thursday, March 14, at the high school.­– photo by David Pugh

One thing that stands out when you talk to the cast of the Pettisville High School production of the musical “Godspell” is energy.

Ryan Rufenacht said once they get everything figured out, “We’ll have a lot more fun with it, and it will be fun for everyone.”

So the audience will be able to pick up on the energy that’s on stage?

“We have a really great band that’s coming in,” Rebekah Holsopple, said.

The band is not “what you would picture as a simple school band. This is more like a rock band. It’s not your typical orchestral-sounding musical,” Rufenacht said.

“It’s a good show for everyone,” Bekah Liechty said.

“They will probably get up and start dancing, and you should let them,” Liechty said.

Holsopple said “Godspell” is “basically, kind of a modern telling of the stories found in (the book of Matthew) in the Bible. It’s basically telling the story of Jesus from his baptism to his crucifixion.”

Mason Stickley said the script does change the setting, because the show is placed in the city.

Liechty said, “I think no matter how religious you are or how connected you are to Christianity, it’s just a cool show.

“I think we can all agree Jesus was a cool guy, whether you believe in him being the Son of God or anything like that. It’s just a cool way of putting it to music. And the music is great.

“I feel like it would be a fun thing for anyone to come to, whether they take something from it or not.

The characters present some challenges.

Detric Yoder is both John the Baptist and Judas– kind of opposite ends of the spectrum.

But Judas, “He’s kind of the opposite, and pretty intense.”

Remember, it was Judas who betrayed Jesus– for money.

It’s not hard to play characters that are so opposite of one another.

“I just hope I don’t forget which character I’m playing,” he said.

But John is a smaller role, so that helps.

Jay-R Allison is an extra, along with Stickley. In total there are three extras in the show.

Stickley said as extras, they were told to create personalities for their roles.

“We can be engaging, but not out front,” Allison said.

“That’s how our characters react with the others.”

Baer said his character, George, “is kind of a silly guy. He’s a goofball. He’s involved in a lot of on-stage demonstrations and he pairs up with Telly for a couple of gags and goofs.”

Rufenacht plays Telly, who he pictured as “childish. But the way he was described to me was, ‘he’s not always there. He’s a little absent-minded. He loses focus,’” he said.

Holsopple plays Uzo, who is “more of this shy character who’s very eager, I feel, to learn about what Jesus is trying to teach them.. Sometimes, she’s a little afraid to speak up,” she said.

“I feel (Uzo is) very different from myself, personally. I feel as though I’m very outgoing and slightly obnoxious. Uzo’s pretty relax compared to myself.”

Liechty said Lindsey is her character.

The cast members talked about some of the challenges they face in getting “Godspell” ready for its opening– fine-tuning their roles, learning the dancing, etc.

Allison said, “It’s worth it in the end because it looks great, it sounds great, and it feels great when you’re done with it.”

Rufenacht said, “I wouldn’t say ‘when you’re done with it.’ It’s while you’re doing it.”