‘God, You Have Something More For Me To Do’

CCNO Volunteer Of The Year 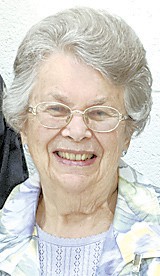 Ask Shirley Stuckey, Archbold, what got her started volunteering at the Corrections Center of Northwest Ohio, and you’ll get a story. ­“ Daughter Judy and I wentonashopping trip to Battle Creek, Mich. On the way back, we didn’t know it was black ice, and (Interstate) 69 has a lot of overpasses,” she said.

“We went into the median strip and flipped over. If we had gone off the other side, we wouldn’t be here.

“We slid across the grass on my side. Judy’s seatbelt didn’t hold. She fell on me, and I was sure the glass was going to break. It never happened.

“God’s angels took that big, high van and just plunked it up on the wheels.”

“My mouth was open. I had grit in my mouth. My glasses were gone, but we had no bruises, except the pastor’s youngest daughter was with us. She had a little bump on her hand. That was the bruises we had.

As time passed, Stuckey kept feeling that God had something for her.

She was working at Sauder Village, where she worked for over 38 years.

A coworker, who was the fe- male chaplain at CCNO, suggested, “Shirley, why don’t you come out to the jail to witness to the girls?”

“I took the (orientation) class, I went out, and the first time I went through those doors (and they clanged) behind me– it didn’t bother me at all.

“Some people say they hear the clang of those doors and they’re done. They still clang, but I don’t even think about it.”

Stuckey was honored as the 2018 CCNO Volunteer of the Year during a banquet held last month.

She has conducted Bible studies for the female inmates since 1994, and is also active in coordinating and distributing cards for Easter and Christmas, as well as cookies at Christmas, for all the inmates.

“I have earned a white badge. I can transport (escort) inmates (around the complex) if I need to,” Stuckey said.

“I started out (working with inmates) one-on-one. The (male) chaplain out there is part-time.

“He called and asked if I would mind taking someone on just to go with me to kind of get the feel. That’s what I had wanted to do, too, when I started, so I said, ‘Sure!’”

Later, “We teamed up, and we’ve been having Bible studies since.”

The group– inmates and volunteers– calls itself the Sisters in Christ Bible Study.

“We have three different areas where ladies are. Right now we’re in EA, which is maximum for ladies.

“All units we go into, the ladies say, ‘Thank you so much for coming.’ Especially EA. They don’t get out of thatunit.” Stuckey’s volunteering falls under the guidance of the Reach Up Jail Ministry and its affiliated group Lamplighters. Stuckey is a founding member of Lamplighters.

In addition to cards and cookies, the group also provides reading glasses, clothing and other necessary items to the inmates.

“We are so grateful that we have the opportunity to go out there to share Christ, that CCNO and the staff allow us to go in and share Christ with the inmates,” Stuckey said.

“They’re there for a reason, but they’re people God loves, just like anybody else.”