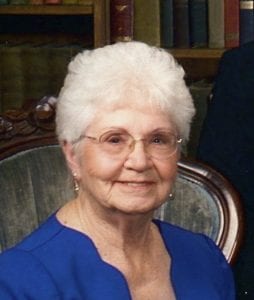 Glenadene Buttermore, age 86, of Bryan, and formerly of Wauseon, passed away Sunday, March 22, 2009, in Bryan.
Mrs. Buttermore was born in Bryan on Nov. 20, 1922, the daughter of the late Glen and the late Zoe (Walker) Hitt. On May 20, 1943 she married Hugene G. Buttermore, and he preceded her in death in 2008.
She was a past-president and life member of the Wauseon American Legion Auxiliary, and a member of the Order of the Easter Star in Bryan.
Survivng is one daughter, Michelle (Ronald) Baylog of Chicago, Ill.; one son, David Buttermore of Bryan; four grandchildren; five great-granddaughters; one brother, Bud (Gertrude) Hitt of Archbold; and one sister, Diane (Joe) Miller of Archbold.
She was preceded in death by her husband, Hugene, and one son, Michael Buttermore.
Funeral services will be held at 2 p.m., Sunday, March 29, 2009, at the Edgar-Grisier Funeral Home in Wauseon, with Bud Hitt, officiating. Interment will follow in the Wauseon Union Cemetery.
Friends may call at the funeral home on Sunday from 12 Noon until the time of service.
The family requests that memorial contributions be given to Hospice of Williams and Fulton Counties or the Williams County Humane Society.
Online condolences may be offered to the family at www.grisierfh.com.–Posted 3.23, 11:35 a.m.