Give Up On Bell Bollards? 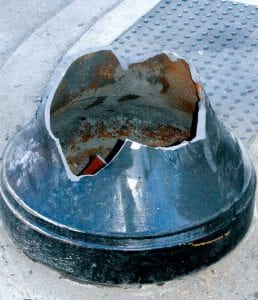 The bell-shaped bollard on the southwest corner of North Defiance and Stryker streets was hit by a semi, Friday, March 5. The cast-iron bollard was shattered, creating sharp edges.– photo by David Pugh

Archbold may be giving up its infamous bell-shaped bollards, after another one was destroyed Friday, March 5.

Lasso was traveling east on Stryker Street, and attempted to turn south on North Defiance Street.

The right front trailer wheels struck the bollard, damaging the truck and bol- lard. The semi suffered a flat tire and other damage.

The dome of the bollard collapsed, revealing jagged edges.

Seaman said the damaged bollard will have to be replaced, but village officials might go to something other than the bell bollard.

One possibility is a more conventional bollard– a steel post, filled with concrete.

He said there will be a presentation on the issue at the next Archbold village council meeting, Monday night, March 15.

The problem the village is having with the bollards is not the fault of the manufacturer.

“The bollards are doing what they are designed to do. It’s not an issue with manufacturing,” he said.

The bollard that was damaged had been ripped from the ground before by a semi.

When the replacement bollard was installed, it was reinforced with rods to make it more difficult for a truck to pull it out of the ground.

“It will not be an easy task” to remove the broken bollard from the ground, Seaman said.