“No bicycle” signs in downtown Bowling Green are prominently displayed.

Bicycles and sidewalks are generally a good combination, except in downtown, where a fast-moving two-wheeler can spell trouble.

While infrequent, bicycles have collided with pedestrians. Injuries resulted and bones were broken.

But almost every day, children and adults are spotted riding bicycles on downtown sidewalks. In the past, police stopped and cautioned cyclists, but it’s not enough.

We need more, and better, signs warning cyclists not to ride on the downtown sidewalks!

Village officials say any additional signs would take away from the look of downtown, which was tastefully redone in 2005. They also say the 11 signs warning that bicycles are prohibited on sidewalks in downtown Archbold are “adequate.”

We disagree. The signs are small; many people don’t even know they are there. 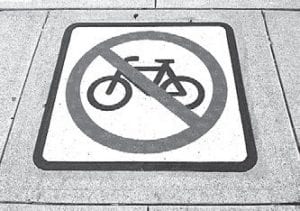 We point to Bowling Green as an example with good, noticeable signage. That city, whose downtown was also redone, not only has signs hanging higher up on posts, but also painted pictograph symbols on the sidewalks showing a bicycle with the internationally recognized red slash through it.

The signs send a clear message that can’t be missed: No riding bicycles on the sidewalks!

The signage, combined with education efforts in schools and churches and wherever else youths congregate, along with stiffer enforcement from police, could make a difference and save someone a serious injury.