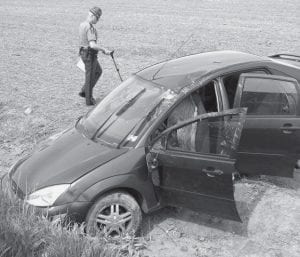 An Ohio State Highway Patrol trooper takes measurements at the site of a single-car crash, Saturday, May 10, on St. Rt. 66, north of Co. Rd. J. The car, driven by Amanda Morrison, 28, Archbold, with passenger Ariah Qaimaria, 6, rolled over after running off the road. Berms along St. Rt. 66 at the crash scene are narrow. Qaimaria was treated and release at Archbold Hospital.- photo by David Pugh

Six-year-old Ariah Qaimaria, Archbold, was treated and released at Archbold Hospital following a one-car rollover accident on St. Rt. 66 about 3:49 pm, Saturday, May 10.

The Fulton County Sheriff report states Amanda Morrison, 28, Archbold, was driving a car south on the highway, with Qaimaaria riding as a passenger, when, about a half-mile north of Co. Rd. J, the car went off the west, or right, side of the road.

Morrison overcorrected and the car went off the east, or left, side of the road, and rolled over into the ditch, coming to rest in a field.

Morrison was cited for failure to control.