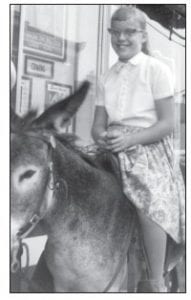 The “Old Photo Corner” in the Feb. 27 edition of this newspaper was of a girl sitting on Mahlon Miller’s donkey in front of the Scott Theater in 1958. Reid Short, the owner of the photo, wanted to know who the girl was.

His father and Mahlon’s wife were first cousins.

The mystery has been solved.

Carolyn (Frey) Kauffman, Goshen, Ind., and formerly of Archbold, called the Buckeye to say it was her, but that she didn’t remember why she got to sit on the donkey. A friend had sent her a copy of the page with the photo.

She is a friend of Bev Miller, Mahlon’s daughter.

We appreciate the help of several readers who called with suggestions on the girl’s identity, including Rachel Rychener, Boise, Idaho, and Dean Sauder, Archbold.–Mary Huber and David Pugh, publishers