Gilmore Gets 26 Years After Shooting Deputy 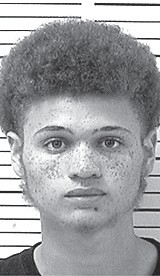 Jeshua Gilmore, 18, Toledo, the man who shot and wounded a Fulton County sheriffdeputy, was sentenced to a total of 26 years and nine months in prison.

The night of July 31, 2017, Gilmore was driving a stolen car with passenger Skye Thibodeaux, 18, Delta, when they were approached by Jeremy Simon, Fulton County sheriff deputy.

Gilmore fled, but after a short chase, the car he was driving broke down in the area of St. Rt. 120, north of US20.

Thibodeaux ran from the car into a cornfield. Gilmore got out and fired four shots from a handgun, striking Simon twice below the left armpit.

Simon was flown by helicopter ambulance to Toledo Hospital. He was released about 48 hours later, and was back at work in about a month.

Gilmore fled the scene on foot. It is believed he stole a sport-utility vehicle and fled to Toledo.

Thibodeaux returned to the scene and surrendered.

At the time of the shooting, Gilmore was under indictment on charges of theft, grand theft, and receiving stolen property.

He was indicted a second time Aug. 21, 2017, on charges of attempted aggravated murder, two counts of felonious assault, having weapons while under disability, failure to comply with the order or signal of a police officer, receiving stolen property, grand theft of a motor vehicle, breaking and entering, and assaulting a police dog.

In a press release, Scott Haselman, Fulton County prosecuting attorney, said between March 1-6, 2017, he stole credit cards from a vehicle, a firearm from a second, and four motor vehicles.

He later pled guilty to one count of attempted aggravated murder along with five counts grand theft of a motor vehicle, grand theft, theft, failure to comply with the order or signal of a police officer, and having weapons while under disability.

The sentence handed down by Jeffrey L. Robinson, Fulton County Common Pleas Court judge, was for 23 years, nine months, with an additional three years to be served consecutively for using a gun in the commission of some of the crimes.

If Gilmore serves the full prison sentence, he will be about 44 years old when released.

Haselman said on July 15, 2017, she failed to stop her motor vehicle for police, then obstructed a police officer in the performance of his duties on July 31.

She was sentenced on Tuesday, Jan. 16, to 30 months in prison. She was ordered to pay prosecution costs and fees and to pay $900 in restitution.