Giant Sigh Of Relief After No Major Injuries From Crash Of Semi, School Bus 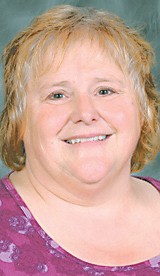 There was a giant sigh of relief after the country learned no one was seriously injured when a semi truck collided with an Archbold school bus on US 6 about 4:06 pm, Wednesday, March 27.

The sigh could be read in some of the almost 800 comments posted to the Archbold Buckeye Facebook page about the photos taken by David Pugh, Archbold Buckeye co-publisher, and video of the crash from security camera at Triple 6 Outdoor posted by Rachel Buehrer.

“Praise God the children and the bus driver are alright.”

“Accidents happen, just be thankful all is okay. That’s what is important.”

“The only thing that can be said is thank God everyone is okay and no students were in the back seats,” just a few of the comments said.

The Henry County Sheriff Department report on the crash is not complete, but preliminary information said JoAnn Cousino, 57, rural Archbold, was driving Archbold School Bus No. 8, an 86- passenger vehicle, east on US 6, and had stopped in front of Triple 6 Outdoor at 24703 US 6 to drop off two children.

The children were Clayten Buehrer, 9, and his brother Kelby, 6.

The HCSD report also states there were two other children on the bus: 13-yearold Cameron Lemley and six-year-old Eva Lemley, both with the same address in the 23000 block of US 6.

The semi struck the leftrear corner of the bus and drove off the left side of the road– the tractor cab separating from the frame.

The tractor frame, cab, and trailer all came to rest in the right-of-way north of the road.

The bus, which suffered extensive damage, was pushed partially off the right side of the road, coming to rest with its front portion in a ditch.

The crash ruptured one of the semi’s fuel tanks, causing a spill.

The crash report states the Lemley children were uninjured.

Both were treated and released.

Twenty students were on the bus when it was struck from behind by a sport-utility vehicle.

Damage to the bus was confined to the rear bumper.