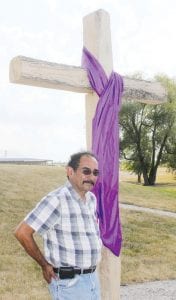 A giant arrow, 54 feet tall, its point driven in the ground, and its shaft pointing skyward.

That’s something you don’t see everyday.

Unless, of course, you frequently travel St. Rt. 2 between Archbold and Stryker, where Carlos Estrada has erected the arrow as if it were shot into the ground from heaven.

Estrada calls his arrow “yard art,” and makes no apology for it.

The arrow came to him in his dreams, starting back in January.

The whole piece is filled with symbolism. The arrow is impacted near a wooden cross draped in purple fabric. The cross represents Jesus; the fabric, the color of royalty. The arrow “appears to hit the bulls eye,” indicating the only way to salvation is through Christ. 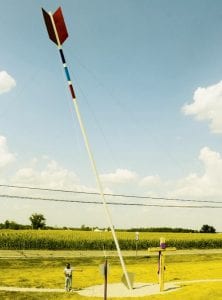 Above: Estrada describes his “yard art” as an allegory for the Bible’s First Book of John. The arrow, shot from heaven, points to the cross. Other aspects of the work have other meanings. – photos by David Pugh

It is here that Estrada’s yard artwork begins to show more of its symbolism. It is an allegory of the Bible’s first book of John, Estrada explained.

“And if you truly truly go to the water’s edge, you’ll truly, truly receive the holy spirit, which brings you back to the cross, to live the rest of your days in consciousness that you’re living your life unto God.”

Around the arrow and the cross are four posts cemented into the ground. Guy wires run from near the top of the arrow to each post, to steady the arrow.

The fourth remains unpainted, dirty, corroded. It represents man, he said, for in the book of Isaiah, it is stated that we are but filthy rags.

The actual work of fabricating the yard art began sometime in May.

Estrada obtained aluminum irrigation pipe from a neighbor, and had local welding shops weld the sections together. That created the shaft of the arrow.

“It started out at 60 feet. And then in my human weakness, I thought I was going to handle the thing all by myself, and I bent it.

“The arrow is all aluminum. It only weighs about three and a quarter (325 pounds).

“I took a piece of steel pipe and drove it into the ground, at about a 1:30 angle (that is, as if viewing the arrow as a hand on a clock face, it would point to about 1:30). I cemented that into the ground.

“Then I had a crane come in, and we slid (the arrow) over it (the steel pipe).

“Of course, it wasn’t that simple. You can’t put aluminum against metal (when aluminum touches steel, there is corrosion), so I wrapped the steel pipe and then slid the aluminum over it.”

It should stand for a long time, he said.

His yard art is still a work in progress. He’s adding signs to reference passages of the Bible “so the onlooker can put it all together,” he said.

Did he get some odd looks when he was building his yard art?

Some suggested it had something to do with a movie about space aliens or crop circles, “and all that fabulous stuff.

“I had to take it like water off a duck’s back, the different euphemisms and criticisms.”

A Place To Contemplate

Just as Estrada has opened his home to travelers over the years, his yard art invites travelers to stop, read the signs, and walk the paths.

When they first bought the property, Estrada said he told his wife, “This place here was to be for my fellow wayward Christian traveler to take a rest.”

There is a driveway just west of Estrada’s artwork, with room for vehicles to pull off the road.

“In all truthfulness, I’m excited about this to the very sense that to say that in my understanding of my dream, and in the visions of how to assemble this, that is its purpose, to draw the attention of the inquiring mind, to contemplate for a moment,” he said.

In that respect, “It’s doing its job,” he said.