Get Serious About Wheels On Downtown Sidewalks 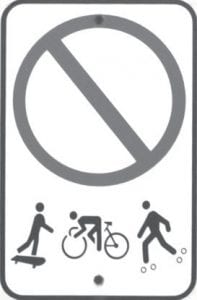 While the bicycle, roller blade, and skateboard seasons may be winding down, something must be done to protect adults and children using downtown sidewalks.

Bikes moving at even a moderate pace have collided with pedestrians coming out of storefronts in the downtown historic district. Serious injuries and broken bones have been recorded.

The Archbold law prohibiting bicycles and other ride-on toys downtown was written to protect cyclists and pedestrians alike.

Just last month, there was an accident between a car and an 11-year-old cyclist, who was riding on a sidewalk. The police report placed the blame on the driver of the car and the bicycle rider, but the mishap occurred in a downtown area where bikes on sidewalks are prohibited.

There is good reason for the rule to be enforced, but many people– youth and adults– are paying no attention.

Archbold Village Council pointed out there are 11 signs at entrances to downtown banning the equipment on sidewalks.

Some say that’s not enough; however, others believe signs aren’t the answer.

Archbold police officers should be downtown giving instructions to bicycle, roller blade, and skateboard offenders. The first offense could be a gentle reminder. The second should be a oneway trip to the offender’s parents and impounding the equipment.

For an adult, after a warning, a citation is in order.

Another suggestion is a police safety program in the schools in the spring. That’s an excellent idea, but why wait?

Could pastors remind their flocks during Sunday services? Could school officials give warnings over the public address systems?

It is incumbent on the community that adults model good behavior by not riding on downtown sidewalks.

It seems a minor thing, but it is the law, and besides, the injuries prevented may be your own.