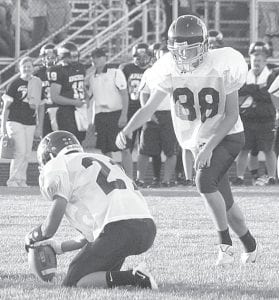 TJ Gerken holds the football for Aaron Bontrager to kick a PAT in Archbold’s non-league contest with Fairview. Bontrager kicked seven PATs and a field goal in the 59-21 victory.–photo by Scott Schultz

After Fairview received the opening kickoff, William Flanary had the ball knocked loose on the first play from scrimmage.

The Blue and Gold recovered. Four plays later, T.J. Gerken was on the receiving end of a 3-yard touchdown toss from senior signal caller Garrett Morton.

Less than two minutes into the game the Streaks led 7-0.

With Fairview starting on its own 10-yard line following Aaron Bontrager’s kickoff, quarterback Brandon Mosier picked up 9 yards on the ground and then threw an interception to Noah Keefer.

With two touchdowns already tucked into his pocket, Gerken was not finished. The Archbold junior added three more TDs to his resume.

Morton connected with Gerken for a 44-yard touchdown toss. Gerken returned an interception 67 yards for a score, and capped off Archbold’s 52 first-half points with an 8-yard run for his fifth TD of the game.

“I never would have guessed in a million years that the first half would have gone the way it did,” said Bryan Miller, AHS head coach.

“I told the guys we played a good half. We made plays when we needed. When you do that, things turn out good, so it was a great start to the game for us.”

Andy Peterson scored five touchdowns in 1983 against Liberty Center, and Doug Leu scored five against Swanton in 1987; all were rushing TDs.

Jake Fidler holds the record for most touchdowns in a game, with six rushing TDs against Evergreen in 2008.

“T.J is real good after he catches the ball, and can make people miss him,” said Miller. “Just before the half, T.J.’s interception return was the second time it has happened for us this year. That was a big play.”

With the offense racking up the points, the Streak defense did its part, shutting out its host in the first half.

Archbold added a score in the third quarter when Tyson Dietrich ran the ball in from 3 yards out.

“I was worried about our defense after our two scrimmages, but they have really risen to the occasion all three weeks,” said Miller.

“Give credit to our defensive coordinator Andy Bentley and all the coaches. I do absolutely nothing with the defense; the coaches and kids do a great job.”