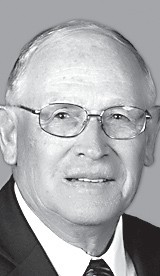 George Lewis Beatty, age 81, passed away with his family at his side after a courageous battle with cancer.

He was born in West Unity, Ohio, to George Glenn and Mae (Netcher) Beatty. He was a 1954 graduate of West Unity High School, where he was involved in FFA and received his State and American Farmer Degrees.

At the age of 23, upon the passing of his father, George took over the family farm, which was established in 1835. On July 26, 1958, he married Corrin Meyers, and together they were married 50 wonderful years and raised four children.

In his lifetime, he was a Pioneer Seed Salesman, a 4-H Advisor, a grain farmer, cattle feeder, breeder and livestock relocator, starting his own trucking company, Bovinland Inc., in 1994.

After Corrin’s passing in 2008, George was blessed to find love again, and married Janice Humbarger on February 19, 2011.

Preceding him in death were two sisters, Dorothy Miller and Mary Lou JoHantgen, and a stepdaughter, Sherri Thompson of Montpelier.