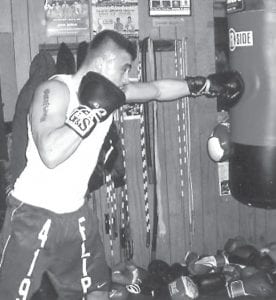 Felipe Garcia, aka “Flipperachi,” works out on the heavy bag. After winning a Toughman competition in January, Garcia will turn professional, with his first bout scheduled for Saturday, May 1 in Toledo. As an amateur, he was twice a Golden Gloves champion and twice a runner-up at the Ohio State Fair.–courtesy photo

Archbold’s Felipe Garcia is a man with a dream, but attaining that dream might cost lots of pain.

Garcia wants to be a bigtime boxer, fighting in Las Vegas, Nev., in big pay-perview extravaganzas.

He wants to become a champion in the ring.

But it’s not just starryeyed dreams. Garcia points out many of boxing’s elite are getting up in years, perhaps too old for the ring. He’s 25, and ready to start his journey to the top.

He boxed as a youth at the Wauseon Boxing Club. As a youth, he had 45 fights, was the Golden Gloves champion for Toledo two times, and was twice the Ohio State Fair runner-up.

Garcia said as a smaller guy, he got into boxing to defend himself. But the club motto, “Ability with Responsibility,” teaches boys that with their boxing ability comes the responsibility to stay away from trouble.

Then he got away from boxing for a few years.

But then he heard about a Toughman competition in Toledo at the end of January.

He put in eight months of training, losing 30 pounds, to fight in the 160-185-pound weight class.

Toughman differs from regular boxing, in that boxing is more about style.

There are three oneminute rounds, and while punches are scored, the whole point of the exercise is to simply knock the opponent out… all for a $500 purse.

Competitors are given heavily-padded 16-ounce gloves and head gear for protection.

Garcia had three fights in two nights of competition, and beat every single opponent they threw at him.

He knocked the head gear off one guy, and knocked another down, but not completely out.

His second opponent was a “tough cookie, who hit hard.”

For his third and final fight, he went up against a 175-pound “straight-up street brawler” who came one way– at him.

How does a trained boxer fight a street brawler? Throw the short “jab” punch, then move quickly. Stay in the center of the ring, away from the ropes. Then look for the opportunity to land a good punch.

Garcia will have his first professional boxing match, Saturday, May 1 in Toledo.

In his pro career, he’s probably going to have to take a punch or two. What’s it like to take a hard punch in the ring?

“Colors will all blur together. A clean knockout, it’s just like a light switch, “ he said.

When the colors begin to blur, Garcia said you only think about defense.

“Get your hands up, stay off the ropes, stay in the center of the ring. The safest position to be is wrapped up” with the other fighter, he said.

One thing he didn’t care for was the “ring name” given to him during the Toledo event.

Without consulting with Garcia, the promoter called him “The Gigolo.”

He prefers “Flipperachi,” a name he created from his own first name, Felipe, and the last part of “Liberace,” after the entertainer and pianist.

Keep an eye out for Flipperachi… he’s on his way.