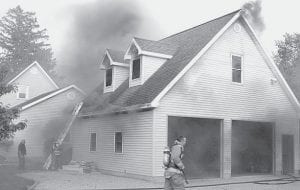 Smoke rises from a two-story garage at 101 Union Street as Archbold firefighters start their attack on the fire. The Monday evening, May 14 fire did about $35,000 in damage. There were no injuries. The cause is under investigation.– photo by David Pugh

Archbold firefighters were called to the home of Kirk S. Weldy, 101 Union Street, about 8:18 p.m., for a structure fire.

When they arrived, they discovered flames coming from the southeast corner of the two-story garage, which was just a few feet away from the house, said Andy Brodbeck, Archbold Fire Department chief.

Also, flames were coming from under the eaves of two dormer-style windows.

Responding to its first fire, the new Engine No. 102 arrived and firefighters deployed two inch-and-a-half hoses. They immediately extinguished the flames on the east side, while the second hose went to the west.

A ladder went up on the roof in preparation for cutting a hole to ventilate the structure, but that was not necessary.

With the flames on the southeast knocked down, firefighters made their way through an entry door on the east side, went up the stairs, and finished knocking down the fire. Windows were removed to ventilate the structure.

Upstairs was a finished room that could be used as a living space, Brodbeck said. At one time, there was a gas fireplace in the area, but it had been removed, leaving an open space. Firefighters used that space to spray water in behind the walls.

They also tore down plaster and removed burning insulation. They used their insulation vacuum to clear out blown-in insulation.

“Basically, we gutted out the upstairs of anything that might rekindle,” Brodbeck said.

“We went through a lot of air bottles,” Brodbeck said.

As of Tuesday morning, firefighters were still investigating the cause of the blaze.

“The fire appeared to have started outside. Near the east entry door, there was a garbage bag. We’re trying to determine what was inside (the bag),” Brodbeck said.