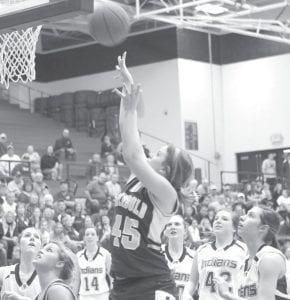 A pack of Fort Recovery Indians watch Sarah Wyse (45) score a basket with 29 seconds left in the third period, giving AHS a 43-39 lead to start the fourth quarter.–photo by Mary Huber

A basket by Hailey Galvan with 19 seconds left lifted Archbold to a 56-55 victory over Fort Recovery in a Division III district semifinal at Napoleon, Thursday, March 4.

A quick start by both teams resulted in a 21-17 Indians lead after one period. Two foul shots by Nicole Hurst with 57.4 seconds left brought Archbold within one, 32-31, at the half.

The Streaks grabbed their first lead of the game, 37- 36, on a Galvan turnaround jumper with 4:07 left in the third. Another Galvan basket widened the difference to 39-36, but a three-pointer by Holly Brunswick tied the score at 39 with 3:30 left in the period.

Kendra Brunswick came right back down and sank another three, putting the Indians back in the lead, 49-48. The two squads exchanged buckets several times over the next three minutes, until Chelsey Leuthold put the Indians ahead 55-54 with 1:05 remaining, setting up Galvan’s dramatic shot to finish the game. 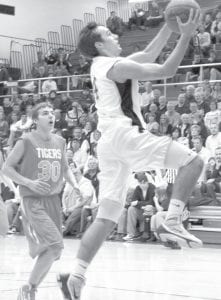 Driving To The Basket

“We had some girls step up and make plays when we needed to tonight,” said Brian Ziegler, AHS head coach. “We had to dig deep and make one last stop at the end of the game, and the girls got it done.

“Abbey (Graber) played a good all-around game. Hailey (Galvan) did a nice job inside for us and Schauby (Schaub) came in off the bench again and played well.

“We did a nice job at the free-throw line tonight, hitting 10 of 14 and five of five in the second half.

“At this time of the year you need to make plays. Devin Newman had a huge basket when we needed one. Andrea Allan scored early when we struggled a little. Stacy had a tough night with fouls, but added some nice defense at the end.” 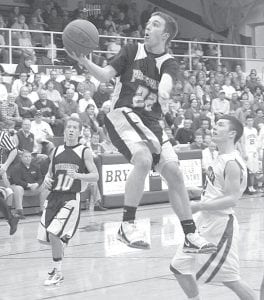 Schaub led Archbold with 15 points. Graber and Galvan each scored 12.