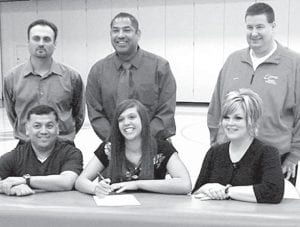 Hailey Galvan, AHS ‘10, has signed a letter of intent to continue her basketball career at Marian University, Indianapolis, Ind.

“I feel that being in a big city will not only provide me with athletic and academic opportunities, but a lot of life opportunities as well,” she said

Galvan, a center at Owens Community College, averaged 4.9 points, 5.8 rebounds and 5.1 blocks per game during her sophomore year.

As a freshman, Galvan averaged 3.8 points, 3.5 rebounds and 3.3 blocks per game. She is a two-time recipient of the team’s Defensive Player of the Year award.

Additionally, she blocked 234 shots in her career, just 13 shy of tying the school career blocks record.

In a game this season against Mid-Michigan CC, Galvan had 12 points, 10 rebounds and 12 blocks.

“She’s very athletic and aggressive toward rebounding and blocking shots, and we feel she’s got a lot more offensive potential over the next two years,” he said.

Bacon is also excited because Galvan will be able to fill the lane, allowing Rachel Turk, his top shot blocker the last two seasons, to move out to the perimeter.

“She’s made a great decision in going to Marian. Like Owens, she’s going to get a great education and be part of a competitive basketball team.”

Marian University is a member of the National Association of Intercollegiate Athletics and competes in the Mid-Central College Conference. The Knights finished 18-10 last season and ended the year with a loss in the first round of the MCC tournament.

At Archbold, Galvan broke school records for most blocks in a game and in a career.–Nicholas Huenefeld, Owens sports information