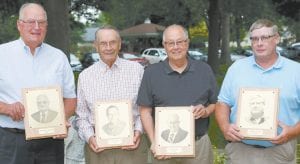 Martin started farming while growing up on the family farm in Fayette.

While attending Fayette High School, he was involved in the FFA program, where he received his State and American degrees.

He took over the family farm and he and his wife, Linda, started the dairy farm, Martinline, LLC. They raised three children and now enjoy their grandchildren and great-grandchildren.

Around 1987, as times were changing, Martin was one of the first producers in the area to incorporate no-till practices into his grain farming.

This sparked the relationship with the Fulton Soil and Water Conservation District by teaming up with them to install waterways and filter strips where needed.

He was named Cooperator of the Year by the Fulton SWCD.

Martin continues to be involved in the day-to-day operation of Martinline, LLC, and farms close to 500 acres in crop production.

He has worked with local producers throughout the years, contracting feeder pigs. After the dairy cows were sold in 1998, he contract fed and raised beef calves for local producers.

Martin is involved in the Fulton County Farm Bureau and was active with the Fayette Christian Church of Disciples, the Pleasant View Cemetery Board, and the Fayette Lions Club.

He was also a 4-H advisor for Fayette Favorites and later, the Dandy Dairymen for 20 years.

Miller grew up being in 4- H and FFA, showing steers at the Fulton County Fair and Lugbill Livestock Show.

He won Champion Showman at the fair and champion pen of five fat steers at the Lugbill Livestock Show.

He was the recipient of the Ohio State Farmer Award in 1964.

Farming began for Ed by feeding steers and hauling livestock for his father’s trucking company.

Ed became president of the tire company in 1985, and continues in the role.

Miller was an original member of the Fulton County Fair Foundation, and served several years as president of the Foundation.

He has also served as chairperson of the fundraising committee for the Spangler Show Arena.

He and his wife, Lila, have served as foster parents for several years. They are also serving their 10th year as co-chairpersons of the Grandstand Diner at the Fulton County Fair, benefiting community programs.

Miller is a charter member of the North Clinton Church, and has served on several committees. He still enjoys being involved, helping in numerous capacities.

Gallup contributes to Fulton County and its agricultural community in many ways.

He is a self-taught man who grew up and has lived his entire life in a two-mile radius of Lyons.

A graduate of Lyons High School, he believes in education and his many degrees that come from the school of experience.

He began his career as a teen raising cattle and the basic row crops of corn, soybeans, and wheat.

Throughout the years, State Line Farms has grown to more than 10,000 acres and includes growing tomatoes for Red Gold, providing seed wheat and beans for Pioneer, raising hay for neighboring dairies, raising hogs, and growing cabbage.

Gallup is meticulous at measuring the skill it takes to understand the moment the soil is just right to plant, and maximize water applied to crops from an irrigation pond.

He was one of the first in the area to understand the benefits of tile and irrigation.

He appreciated and utilized flexibility, independence, and the financial rewards that semis, grain-handling systems, greenhouses, maintenance shops, and technology such as GPS offer.

Gallup is a calm, God-fearing family man. He is honest in his dealings.

He has and continues to put his family in the forefront, and with their cooperation and hard work, has been able to successfully build a large business.

He believes there is a right way to conduct your life and run your business: Do unto others, and help those in need.

He and his wife, Tina, have three children and seven grandchildren.

Wyse grew up on a grain and livestock farm on the south edge of Wauseon. Shortly after high school in 1971, he bought 30 acres, which have grown to a 1000- acre operation with his son, Brett.

Wyse started raising hogs in high school, and had a 115-sow farrow-to-finish operation until 1992, when he joined with Larry Fraker to form Fraker and Wyse Construction, which operated for 20 years.

As a fair board member, Wyse was the construction leader for the gospel building, coordinating many volunteer workers and construction teams to build the building.

He donated many hours of labor to make the dream of having a permanent gospel building to use rather than a tent.

He kept the project on schedule, and the building was open starting with the 2015 fair.

The building is now used year-round for weddings and other activities besides the fair.