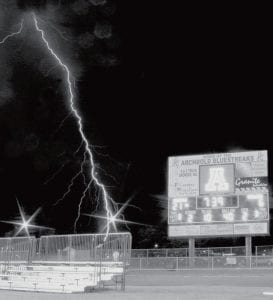 It was lightning, not a funnel cloud, that caused a delay in the Archbold Fairview football game, Friday, Sept. 7. Jaycee Riley, Archbold, captured this picture of a lightning bolt streaking toward the ground near the new Archbold football stadium. A blue streak for the Blue Streaks?- courtesy photo

Despite what was announced over the public address system at the Archbold-Fairview football game at the Archbold stadium Friday night, Sept. 7, the tornado sirens were not crying wolf.

David Deskins, Archbold Area Schools superintendent, said an announcement was made, telling the crowd the tornado sirens were a false alarm.

Actually, a funnel cloud had been sighted in the Delta area.

Rich Kilgour, Fulton County Sheriff Department 911 coordinator, doesn’t have to rely on reports. He saw the funnel as it was headed for Swanton.

“I was at (the Swanton football game) sitting in our (Swanton) rescue squad, when all of a sudden, I heard the sirens. People started getting up and walking to the school.

“I see them pointing to the southwest, so I get out of the squad, and sure enough, there it is, about halfway from the tops of the clouds to the ground,” he said.

Deskins said when the sirens sounded, Archbold school district officials were, “scrambling to get in touch with the right authorities. Do we evacuate or not? We have 3,000 people (in the new football stadium). Do we need to immediately evacuate them?”

Deskins said he reached Andy Brodbeck, Archbold Fire Department chief, who was away from Archbold at the time. Brodbeck got in touch with the Fulton County Emergency Management Agency, which informed him the funnel cloud was near Delta. Brodbeck then told Deskins Fulton County EMA did not believe evacuation was necessary.

An announcement was then made saying the alarm did not require the evacuation of the Archbold stadium.

“He said they were accidentally set off, and put the folks at ease,” Deskins said.

The game started, but at the beginning of the second quarter, they began to hear of a second weather front. While it wasn’t capable of producing tornados, the front could bring lightning and heavy rain.

Game officials spotted lightning, and at that point, the game was stopped and people were asked to either go to the school or to their vehicles.

Deskins said it took 10 to 12 minutes for everyone to exit the stadium, with a few exceptions. The crowd was undercover before the rain hit.

Clear To The West

Deskins said he contacted Bryan and Montpelier where the storm had passed. They reported they had resumed their games.

The crowd returned to the stands about 10 pm. Halftime was reduced to 10 minutes, and the bands performed from the track, because the field was too muddy.

The game was finished shortly after midnight.

Control of the county’s tornado sirens rests with the dispatchers in the Fulton County Sheriff Department’s dispatch center.

Kilgour said FCSD policy states if an unconfirmed report of a funnel cloud or tornado comes in, it is their option to set off the sirens.

An “unconfirmed” sighting is one from a member of the general public who has not had National Weather Service weather spotter training.

In the Friday incident, two calls came in right away, followed by a call from a Delta firefighter who had the training, making it a confirmed report.

Bob Hartman, Fulton County EMA director, said while dispatchers can activate the sirens by individual areas, county policy is if one is sounded, all Fulton County sirens sound.

Sounding all sirens “makes everyone aware of the potential for danger.

“Tornados generally move in one direction, but you don’t know, and there is the potential for others (funnel clouds or tornados),” he said.