Fulton County Unemployment Up .1%, Still Under 5% 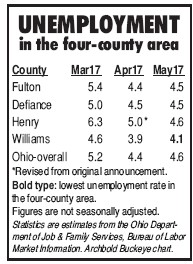 Fulton County unemployment was up by one-tenth (.1) of a percentage point for May.

Fulton County unemployment, as initially announced by ODJFS, has been 4.6% or less nine out of the last 12 months.

In the four-county area, Williams County had the lowest unemployment rate in the state, at 4.1%. In April, unemployment there was 3.9%.

Henry County had the highest rate in the area, at 4.6%.

Defiance County was tied with Fulton.

ODJFS estimated there were 1,000 people out of work in Fulton County in May, with 21,700 employed. That makes a total labor force of 22,700 workers. of Ohio, unemployment increased in 53, decreased in 27, and was unchanged in eight.

The lowest rate for May was Mercer County, at 2.8%. The county has held that title throughout 2017. Mercer County is in central Ohio on the Indiana border.

The highest rate was in Monroe County, in southeastern Ohio on the West Virginia border, at 7.2%. That’s down from February, when it was 11.8%.

All county unemployment data is not seasonally adjusted. The comparable figures for Ohio as a whole and the nation were 4.6% and 4.1%, respectively.

When seasonal adjustments are applied, the Ohio rate becomes 4.9%, while the national rate is 4.3%.

During May, there were more than 5.7 million people in the Ohio labor force. Of those, about 5.5 million were working, with 266,200 out of work.