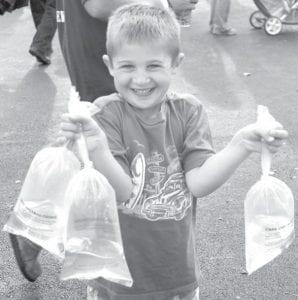 Brady Bacik, 5, Archbold, shows off the three goldfish he and his sister Eliza won at the 2011 Fulton County Fair.

And you thought your utility bills were high.

But staggering as that sum is, it’s less than 10 percent of the $1.4 million the fair board spent to stage the Fulton County Fair and maintain the fairgrounds in 2011.

“I don’t think people realize how much money it takes to put on a fair our size,” said Carl Buehrer, who has served as president of the Fulton County Fair Board since 1973.

“And it would cost a whole lot more if it weren’t for the generosity of volunteers, sponsors, and organizations that donate their time, services, and merchandise each year to make sure the Fulton County Fair is a success.

“For the volunteers especially, it’s a work of love. I figured out once that our 15 board members each volunteer the equivalent of six weeks a year to work on the fair, starting with weekly work nights beginning in May through the end of the fair. 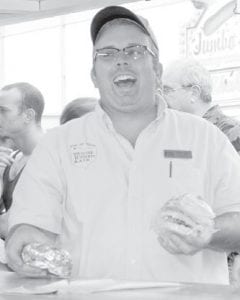 Jake Grime, Archbold, picks up three sandwiches to go at the 2011 Fulton County Fair. He was taking them to his family in the campground.

“Most board members work at least 18 hours a day during Fair Week.

“For all that, they’re paid $300 a year, and many of them end up spending much more than that to use their own equipment and fuel on our work projects.

“We have other board members in charge of different livestock shows and contests who will donate $500 or $600 out of their own pockets to help sponsor the events.

“Our 15-member Fair Board Auxiliary isn’t paid at all, but they’re still working those hours.

“There’s another 30 or so folks we know we can call on to help if we need them. That’s not counting all the volunteers in local organizations that run food stands or participate in the fair in other ways.

“They help make the fair possible, and then they turn around and take any money they make and either reinvest it in the fair or in the community.”

The State of Ohio requires county fairs to be audited every other year, and each November, the Fair Board places a legal notice in local papers that details its expenses and income for the past 12 months.

Despite the shortfall, the Fair Board ended the year with a cash balance of $482,333.64, thanks to its foresight in establishing a $500,000 operating fund.

This fund is used instead of taking out a short-term operating loan to cover all the expenses that are needed year round and in preparing for the fair.

This fund also covers any unforeseen expenses or income shortfalls.

To Buehrer and his fellow fair board members, “debt” is a dirty word. So is expecting a handout from government.

“When I came on the board 40 years ago, we were going to the county commissioners for any projects we were doing,” Buehrer said.

“I felt that wasn’t the way we should be doing it, so we worked hard to become selfsuffi cient.

“I don’t believe it’s the taxpayers’ duty to put on a county fair. Despite what some people assume, there’s no ‘fair tax’ in Fulton County.”

(The fair does receive some support from the State of Ohio for harness racing and 4-H and $3,300 from the county commissioners that is mandated by the state legislature.)

The Money Comes In…

More than a third ($504,218.08) came from rental and storage fees and utilities paid by individuals, campers, concessionaires, merchants, and organizations to use the fairgrounds in the off-season as well as during Fair Week.

…And The Money Goes Out

“Anything we make goes back into the fair,” said Buehrer, a claim confirmed by the Fulton County Fair Board’s balance sheet.

“Our goal as a fair board isn’t to make a profit on these shows,” Buehrer said.

“Despite the cost of the big-name acts, we try to keep ticket prices as low as possible.

“Some people in our area wouldn’t otherwise have an opportunity to see some of these big acts, or they couldn’t afford to.

“This year, for example, our tickets for the Styx concert on Sunday and Montgomery Gentry concert on Labor Day range from just $20 to $25, when they’d be paying $40 or $70 in a bigger venue.

“We may not break even on some of these shows, but when we average the income from all the entertainment, it all works out.

“We get sponsors for some of the shows, like the tractor pulls.

Another $27,000 went toward vet fees, electrical and plumbing services, a biannual audit by the Auditor of the State of Ohio, and other professional services.

“”Legal fees are supposed to come under that category, but we have a lawyer who never charges us,” Buehrer said.

In 2011, junior and senior fair expenses, as well as those for fair contests and races, accounted for a little over $190,000.

Salaries, wages, and benefi ts for the fair board secretary, caretakers and their summer help, gate attendants, a multitude of judges, and all the people who keep things clean during the fair cost just over $134,000.

The cost of renting or leasing equipment ran around $69,000

Repairs, property expenses, and capital outlay– the costs incurred to maintain and improve the fairgrounds– were just over $365,000.

And, as any homeowner knows, “maintaining and improving” is not a one-time effort.

According to Carl, it’s not just free labor from volunteers and donations from local organizations and businesses that keep the fair’s costs down: it’s also good old-fashioned thrift and ingenuity.

When the fair needed a new electric sign on State Route 108, an item that would run well over $50,000 if purchased new, it instead bought a sign that had been repossessed from a Las Vegas casino and mounted it on the framework of a used sign from a Michigan hospital.

The total cost, including converting the fair’s original road sign for use in the sale barn, was roughly $35,000.

Another time, when the fair’s portable staging needed replacing, two or three board members and some local farmers went to Tuscarawas County to look at a portable stage.

They gleaned some ideas and spent the winter welding a stage together– but not just any stage. They engineered it so that it could fold up and was mobile.

With thrifty mindset and some ingenuity, they used a motor and gears from an old ensilage wagon to make it portable.

Perhaps the most ambitious of the fair board’s thrifty initiatives took place in the mid-1990s, when it moved the steer, beef, and dairy barns from their original location near the midway to their current sites, rather than build new barns.

Begun immediately after the 1994 fair, the project involved countless volunteer hours to complete, as well as the assistance of the Army Corps of Engineers.

Despite the fair’s whopping $1.4-million price-tag, Buehrer said that the fair board is committed to keeping the fair affordable for families.

One-day gate admission is just $5 for an adult, with children 15 and under admitted free when accompanied by an adult. Parking is free, too.

Fairgoers who plan to attend multiple days can save money by purchasing season tickets in advance for $15 from 4-H and service clubs, at the fair office, or at area businesses.

Season tickets at the gate, available the first two days of Fair Week only, are $20.

“If you’re a dedicated board member, your main goal is to make sure the fair is a success in any way you can,” Buehrer concluded, adding with a chuckle, “Nobody’s in it for the wages.”