Fulton County Fair: 150 Years Old And Still Among The Best 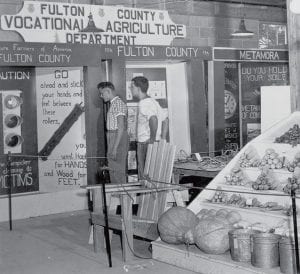 Agriculture displays, like this booth from years ago featuring high school student projects, have been enjoyed by fairgoers as a quintessential part of the Fulton County Fair since “day one” in 1858.- courtesy photo

Well, it might be inconceivable- until you talk to anyone trying to navigate the midway crammed with people, rides, games, and food stands.

If the fair sees similar attendance figures during this year’s 150th anniversary, Dresden Howard, of Winameg, will have brought joy to many.

Along with other supporters, Howard organized the first Fulton County Fair in 1858. He had enjoyed a fair in Adrian, Mich., and thought Fulton County should have one.

The first Fulton County Fair was held east of Ottokee, where 4,000 persons attended. They had plenty of walking space, but the 10 rented acres didn’t provide enough room for a horseracing track.

And, after all, horseracing, not baseball, was then America’s popular sport.

So the fair only improved after its 1865 relocation to the larger, present-day grounds north of Wauseon. Horseracing began and today is enjoyed by many fairgoers such as Sanford Nofziger, Archbold.

“From the time they start, to the time they’re done, I stay right there,” said Nofziger of the horse races. He has spent many hours at the track since he began attending the fair at age 16, in 1931.

However, it took a lot of time and effort before a fair like the one Nofziger and others attend today was possible. The new 40-acre plot in 1865 cost $500, maybe because of the toil and hardship necessary to convert the swampland into a fairgrounds.

Workers succeeded in creating a quality fair. In 1896, the Northwestern Republican newspaper praised the fair for “good order and absence of all drunken persons.”

Then, midway rides attracted crowds like they do today. A popular merry-go-round, mentioned in the 1904 newspaper, was the first record of rides at the Fulton County Fair.

The Fulton County Fair was ahead of its time, even in 1932. That year, it built on the Junior Fair tradition started in 1918 by becoming the first Ohio county to judge projects entered by boys and girls.

The improvement and innovation in the Junior Fair alone demonstrate the Fulton County attitude that won the Ohio “Best Fair” award in 1957, its centennial year.

Desire for continued improvement led the fair board to start land expansions in 1965.

That year, if fairgoers brought one of the plastic snowballs dropped by helicopters over towns and villages, they entered free on opening day.

When fair attendance broke 100,000 in 1972, it meant the fair was so popular that three times the population of Fulton County was attending.

The fair continues to grow. Today it covers nearly 200 acres, houses 60 permanent buildings, and is one of Ohio’s Blue Ribbon fairs.

To keep the Fulton County Fair and its traditions alive, the fair board keeps busy year around.

Carl Buehrer, president, and the 14 other loyal board members serve on approximately 50 committees.

“We all got a lot of responsibilities,” Buehrer said, “but everybody pulls their share of the load and we get it done.”

The effort requires an average of six weeks on the fairgrounds per board member, starting in April with weekly planning meetings.

The time involved isn’t the only challenge. The board must provide an affordable fair in the face of rising expenses.

After a young Buehrer spent a $25 summer paycheck in one day at the fair, he said, “I can remember how bad I felt because all my money was gone.”

It was Buehrer’s first lesson in economics, and now he tries to be financially conscious at the fair.

“We like to keep the fair selfsupporting so we’re not using tax dollars,” he said.

He wants to expose students to the valuable opportunities he discovered while growing up in Defiance County 4-H and FFA.

“I like to see kids compete in something that they had to work at individually,” he said.

“They just work their hearts out for us. Everybody that supports us, everybody that works for us, is the reason that we are.”