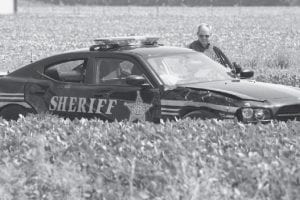 A Fulton County Sheriff Department deputy faces disciplinary action, and a traffic ticket, after his cruiser was involved in a crash, Friday, July 18, while responding to a call. 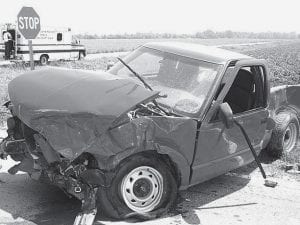 Darrell Merillat, Fulton County sheriff, said Chad Hayward, 35, a three-year veteran of the department, was responding to a motorcycle accident on US20 when his marked sheriff department cruiser collided with a pickup truck driven by Troy Williams, 34, Waldron, Mich., at the intersection of Co. Rds. L and 23.

Merillat said the emergency lights and siren were on when the crash occurred.

The OSHP report states at about 1:53 pm, Hayward failed to yield at the stop sign, and collided with the pickup.

Fayette Rescue and ALS-1, the Fulton County paramedic unit based at Archbold, had been dispatched to the motorcycle crash.

Fulton County dispatch sent ALS-8, the paramedic unit based at Wauseon, and, at the request of Fayette, sent Archbold’s basic life support unit to the second crash.

Andy Brodbeck, Archbold Fire Department chief, said Fayette was able to send an ambulance to the crash at Co. Rds. L and 23, and ALS-8 was cancelled.

Williams and Hayward went to the Fulton County Health Center. Williams was taken by Archbold ambulance, while Fayette transported Hayward. Both were treated and released.

Despite the lights and siren, Merillat said Hayward is still required by state law to yield at the stop sign. He failed to do so.

"He (Hayward) is at fault. He should have made a stop," he said.

OSHP troopers cited Hayward for failure to yield from a stop sign.

Merillat said Hayward will face FCSD disciplinary action, and he will decide what punishment Hayward will receive.

On Monday, Merillat said he was still considering the decision.

He said Hayward was scheduled to return to duty Monday.

Merillat said he was not making any excuses, but FCSD deputies do put in a lot of time driving, covering a lot of miles. When the additional stress of responding to emergency calls, the chance of being involved in a crash are greater.

"We’re going to get two estimates, but I will not be surprised if they total it out," he said.

The cruiser involved in the crash was a 2007 Dodge Charger, one of two in the sheriff department fleet.

"We’re down to one now," Merillat said.