Friendship Days Successful, Revenue Up About $7,000 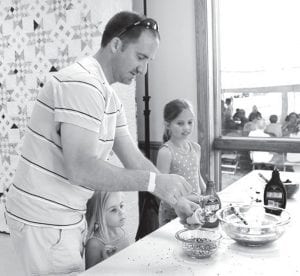 Ice Cream With Sprinkles Tyson Nofzinger helps daughter Hannah add sprinkles to her ice cream cone as her sister Malorie looks on during Pettisville Friendship Days, held last weekend. Tyson is a 1997 PHS graduate. He and his family live in Wayne, Mich., but returned to Pettisville for Friendship Days.– photo by D. J. Neuenschwander.

“It was well supported by the community,” she said.

“We had very good attendance at the Friday night concerts, and we had record turnout of runners and walkers for the Saturday run-walk events,” she said.

There were 150 signed up for the competitions.

“We had a good turnout for the fishing derby, but the fish didn’t want to cooperate. But, that’s why they call it ‘fishing’ and not ‘catching.’”

Some fish were hooked, but no catfish were caught. Skates said it is a known fact that there are catfish in the Pettisville Park pond.

“The weather was beautiful,” she said. “We had rain Wednesday night during setup to knock the dust down, then we had a good rain Sunday afternoon. The breeze helped keep things cool.” 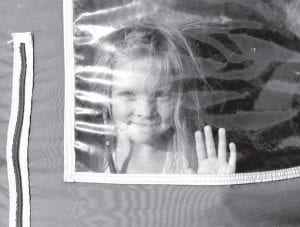 Gazing Out The Window Sophie Kahler, Archbold, peaks out of a window of an inflatable maze at Pettisville Friendship Days.– photo by D. J. Neuenschwander

Skates estimated the event raised about $34,000.

“We’re still getting all the details. We have a few bills that are outstanding,” she said.

The next Friendship Days are in 2018.

There is a change in the way the event will be organized.

Skates said she and her husband Jerry will be the last co-chairmen from the Friendship Days committee.

For 2018, the Park And Recreation Committee, PARC, will take over.

The PARC Board oversees the operation and maintenance of the Pettisville Park. PARC is a private group; it and the park receive no money from taxes.