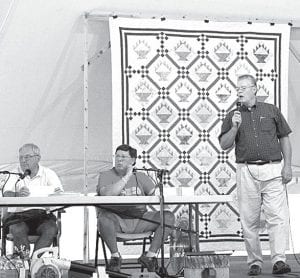 Baskets In The Park,” the 2012 Pettisville Friendship Days quilt, had two owners in one night. The winner of the quilt raffle donated it back to be sold during the Saturday, June 23 auction. The quilt raised $5,050.– photo by D. J. Neuenschwander

Even though it was given away in a raffle, the 2012 Pettisville Friendship Days quilt, “Baskets In The Park,” ended up on the auction block.

In the past, the Friendship Days quilt was offered at auction.

But because not everyone can afford to purchase a handmade quilt at auction, organizers of the every-other year festival decided to offer the quilt in a raffle, with the drawing held during the Saturday night auction of the four-day, June 21-24 event.

There were 400 tickets sold, raising $4000 for the Pettisville Park.

In a surprise move, the winner of the quilt, Mrs. Terry Rufenacht, donated the quilt back to be offered to the highest bidder.

In general, good weather over the weekend and the wide variety of activities offered are credited with helping make Friendship Days a success.

Karla and Jay Pursel, 2012 chairmen, reported there was a steady stream of people for the events, although no exact count was available.

Final figures will not be available for several weeks, but Lynn Miller, festival treasurer, reported receipts appeared to be very close to those from the previous Friendship Days in 2010.

Another big part of Friendship Days proceeds comes from the food sold. Friday night figures show that 600 meals were served at the family BBQ, with additional items sold through the concession areas.

On Saturday morning, nearly 200 purchased break- fast at the park, and the Saturday night Dinner at the Park served almost 300 beef brisket dinners, complete with pie or cake for dessert.

The festival also included children’s carnival games, inflatable games, a pedal pull, a visit from a helicopter ambulance, and a special display of the World Trade Center beam that will be the centerpiece of a 9-11 memorial at the Fulton County Fairgrounds.

The festival closed with a community church service on Sunday morning.

Money from Friendship Days goes to support the community park.

Pettisville is an unincorporated village, with no local tax structure.

The Friendship Days festival is planned and carried out by Pettisville area volunteers every other year to raise money for upkeep and improvements to the park.– D.J. Neuenschwander