Friday Parade Of Lights Has More Than 50 Entries 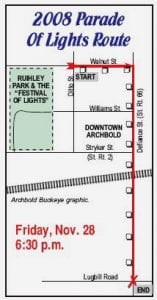 Nanette Buehrer, director of the Archbold Area Chamber of Commerce, said Monday this year’s Parade of Lights has well over 50 entries.

"I had to laugh. I signed up a helicopter and a cow on the same day," she said.

"We’ve got twirlers, bands, choral groups, horses, lots of trucks, and lots of floats," she said.

Last week, Buehrer appealed for volunteers. By Monday, "Plenty of folks came forward to help us with organization at the ConAgra parking lot, so we’re real happy," she said.

"We have been working closely with the Village of Archbold Street Department, the Police Department, and Parks and Recreation so the parade goes off smoothly, and everyone communicates about what things they have to do."

This Friday, floats are scheduled to arrive at the ConAgra parking lot between 5:15 pm and 6 pm. From there, they will be sent to Walnut Street to be put in line. That process should be complete by 6:15 pm.

Traditionally, after watching the parade, the crowd returns to their cars for a drive through Ruihley Park to view the Festival of Lights Christmas displays.

Setup for the festival was delayed by rain on the morning of Saturday, Nov. 15. Buehrer said with the help of workers from the Parks and Recreation Department, all the displays were set up and ready to go by Saturday, Nov. 22.

Only one problem has been discovered. A controller, which operates one of the animated displays, has failed.

"We’ve ordered a new one. We hope it will be here in time for Friday," Buehrer said.

Archbold benefits from the parade and the festival because it brings people to the village. Often, they visit local restaurants and shop local stores.

Also, Buehrer said the event brings community members together to enjoy the holidays with family and friends.

There was a good crowd for a downtown merchants open house, Friday, Nov. 21 and Saturday, Nov. 22.

"People are beginning to feel festive," she said.