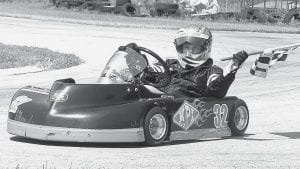 Mike Kinsman waves the checkered flag on his victory lap after he won the stock medium class kart feature at Fremont, Sunday, July 6. In addition to the feature win, he also won both heat races, not a bad result considering it was his first race on a paved track in the 2008 season.- courtesy photo

She was the second-fastest qualifier, behind Mark Frey, Archbold. He was second in the senior econo heat and the feature.

Nofziger, of Pandora, swept the senior heavy class at Jackson, setting the fastest qualifying time, then winning the heat and the feature race.

It was his third feature win in four tries in stock heavy at Jackson.

Huffman, veteran Archbold kart racer, was third fastest, then third in both the heat and the feature at Jackson.

But he picked up the feature win, plus two heat race victories, in the stock 400 class at Fremont’s paved oval track Sunday, July 6.

Kinsman, Archbold, made his first foray onto pavement this season at Fremont Sunday. He had run some dirt-track races this year.

Pavement seems to suit him. Racing in the stock medium class, he swept, winning both heats and the feature.

Racing in the 250 cc unrestricted class, Herschberger was the second-fastest qualifi- er, then finished second in both the heat and the feature.

But his father, Lavon, said the night was a victory, because Tyler’s racer didn’t break any parts.

Short wasn’t so lucky. He was third fastest qualifier in the 250 cc restricted class, and was second in his heat race.

In the feature, he was challenging for second when his car developed a clutch problem. He had to settle for third.- information provided by Lavon Herschberger and John Huffman, written by David Pugh