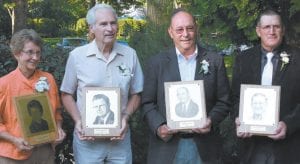 Four persons have been named to the 2013 Fulton County Agricultural Hall of Fame.

They were honored at a ceremony at the Ruihley Park Pavilion, Monday, Aug. 19.

He has been a livestock auctioneer for the fair since 1959, and has been on the Fulton County Fair Foundation and Livestock Sale Committee.

He actively promoted youth in agriculture and showed livestock at the fair as a child.

He continues to be part of the livestock auction today. His interest in the growth of the fair provided pivotal support for both show arenas at the fairgrounds.

At a young age, Frey developed a passion for auctioneering, which eventually led to the building of Frey & Sons Real Estate & Auctions. When working with rural clients, Frey focuses attention on what would be the best use of the farm and what meets the needs of the farm client, including zoning regulations, water issues, and division of land.

He has won numerous awards in auctioneering, and continues to auction in retirement at local charity events, including the Black Swamp Benefit, which he helped establish.

He served as a board member for Farmers & Merchants State Bank for 26 years, and was past-president of the Archbold Rotary and Archbold Area Chamber of Commerce.

Frey has served as the president of the Ohio Auctioneer Association and on the board of directors of the National Auctioneers Association.

He and his wife, Joyce, have two sons and three granddaughters.

He is a longtime member of Zion Mennonite Church, where he has been active as an usher, worship leader, youth mentor, and in the choir.

Johnson was the Fulton County Fair Board secretary for 19 years.

So challenging was her job that, when she decided to retire after the 2011 fair, her replacement was hired so that she could work with Johnson for two full years and two full fairs.

In 2011, she was recognized as Fair Supporter of the Year.

As the fair grew, so did her responsibilities. Fair week camping and off-season rentals increased her duties and the necessity for detailed recordkeeping to satisfy the auditor and insurance agency.

As Fair Board secretary, Johnson took the fair from the shoebox recordkeeping age to the computer age. Whenever asked to handle a new task, no matter how daunting, she did it without protest or complaint.

During Fair Week, she spent up to 16 hours a day at the fair office, where a staff assisted her.

In spite of being interrupted all day by people for reasons that ranged from very important to not so much, Johnson and her crew maintained their cool.

She also is active outside of the fair. She and her husband, Curt, have farmed for the past 49 years, and Jeanne keeps the farm books.

They have three children and five grandchildren.

Jeanne is a longtime member of the Fayette United Methodist Church and the Farm Bureau. She has served on the Fayette Library Board and Chesterfield Township Zoning Board.

Liechty promoted the agricultural industry in Fulton County by being involved in poultry production and processing from 1930-1972.

He was a northwest Ohio pioneer in developing the processes for raising capons for their outstanding meat quality.

His poultry business brought families into the area from elsewhere, and created a significant number of jobs in the county.

At the peak of hatchery operations in the 1950s-60s, Liechty was hatching 50,000 chicks a week, year ‘round, and utilizing farmers who owned breeding stock or shares of the Sunnycrest operation in the county.

He always encouraged young startup farmers to try the poultry business, and was well known for loaning startup funds and delivery chicks or equipment on a handshake.

He also participated in joint ventures throughout Ohio and in Texas and Latin America.

Liechty also spent much time writing articles for the industry based on learning he had gained from study and experience.

In its prime, Sunnycrest was described as an “integrated” poultry business.

He bought and sold eggs, hatched or sold them; bought, hatched, and sold unique breeds of chicks; raised his own poultry or purchased them from local growers to be dressed in his facility; transported eggs or chickens with his own trucks; and distributed fresh or frozen product via his Toledo wholesale facility.

As the viability of smallto medium-sized poultry businesses across the U.S. went into decline in the late 1960s, Sunnycrest was one of the last two or three to survive in Ohio.

He had a perfect attendance record with the Wauseon Kiwanis Club for more than 25 years, holding various posts, and was a charter member of the United States Poultry and Egg Producers Association and its first treasurer.

Henricks has been a promoter of Fulton County agriculture by being involved in the dairy industry as a breeder and association leader for over 40 years.

He raises corn, wheat, soybeans, and alfalfa, along with a productive herd of Holstein dairy cows.

Henricks has been progressive in his dairy operation by practicing good herd nutrition and sanitation, utilizing conservation tillage and nutrient management practices, and planning for the next generation of his farm operation.

He promotes the dairy and agriculture industry by exhibiting dairy cattle at the Fulton County Fair.

His presence in the dairy barn at the fair helps maintain the fair’s quality show and district shows. He has won Premier Breeder and Exhibitor awards at the fair.

Henricks’ dairy farm has been host to many school field trips, and he has volunteered his time and experience to training local FFA dairy judging teams.

He has donated hours to the Fulton County Dairy Service Unit and District 10 Holstein Club.

Through fair and leadership activities, Henricks has discussed the importance of agriculture and dairy cattle with friends and strangers.

He has served as treasurer, elder, Sunday School teacher, and worship leader at Inlet Mennonite Church. He has been a longtime member of Farm Bureau, Dairy Farmers of America, and Holstein Association USA.

Pigs can cover a mile in about 7 1/2 minutes when running at top speed.