Freedom Train Arrives In Archbold In 1975 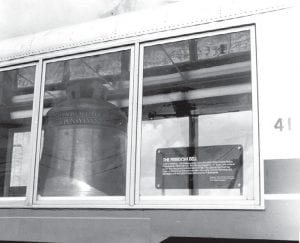 A giant replica of the Liberty Bell in one of the Showcase Cars of the American Freedom Train.

It consisted of 26 cars, pulled by an old steam locomotive, now a relic in era of diesel power.

And even though it arrived late at night, in the rain, people turned out to meet it.

It was the American Freedom Train, and it carried a precious cargo– bits and pieces of the history of America.

For three days, Archbold found itself in the limelight, as it was the subject of everything from television network news cameras to reporters for the nation’s biggest and most respected newspapers.

“It’ll put us on the map, as the smallest community to host the Freedom Train,” said William Lovejoy, Archbold mayor.

“And it showed anybody interested that a small community can work together and pull together and make the impossible possible,” he added. 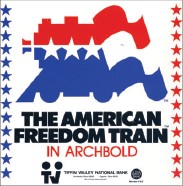 But the benefits were not all one-sided.

Richard Harris, retired superintendent of Archbold Area Schools and the man credited with coming up with the idea to entice the train to Archbold, said the Archbold visit was “the salvation of the whole Freedom Train.”

The train was visiting only large cities. Attendance figures were poor.

The visit to Archbold, where over 36,000 people visited despite rain and mud, “turned the whole thing around.”

Harris read about the train in an educational journal and decided it “might be a good thing to have it come to Archbold.” 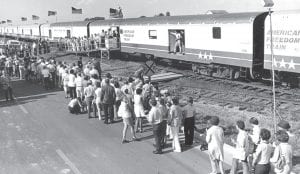 Crowds line up in the bright June sun to visit the American Freedom Train on its historic visit to Archbold.

Smith said he’d be in Washington that week, so he would stop by (the Freedom Train office) and take a look, Harris said. When Smith re- turned, he said, “We want to get it here. We’re going to get it here.”

Lovejoy said Smith “gave ‘em a sales pitch. They (representatives of the corporation running the train) sent people out to find fault.”

After attendance problems in large cities, however, the sponsors “started to pay more attention to small towns.

“The press fell all over it (the train),” Lovejoy said.

Archbold was the subject of reports in The Los Angeles Times, The New York Times, and other newspapers.

Television news crews turned their cameras on everything from the train to Ickey’s, and suddenly, a little restaurant in a bank building was on national television.

Archbold was well prepared for the visit. The town was decorated with bunting. Parking lots all over town were filled with cars. Buses were used to shuttle people to and from the train, which was parked on the siding parallel to Myers Road.

Before the train could stop, Conrail had to repair the siding, Lovejoy said.

The train wasn’t the only attraction, as tents and dis- play areas were set up in a field just north of the International Mineral & Chemical plant, south of Barre Road.

But rain Saturday evening turned the field into a quagmire and cut attendance.

Those who put up with the rain and long lines were treated to “the most patriotic display of America I’ve ever seen,” Lovejoy said.

“They didn’t go overboard. It wasn’t in bad taste, in my opinion.”

There are thousands of memories about the Freedom Train and its visit to Archbold. Lovejoy said he got the biggest kick out of a photo of Orrin Taylor, then-editor of the Archbold Buckeye.

The caption “identified him as me,” Lovejoy said.

There were some attempts to buy the train. And there is a document which submits a claim to the Guinness Book of World Records, citing Archbold as the smallest town to host the train.

The giant locomotive that pulled the Freedom Train was eventually destroyed in a fire.