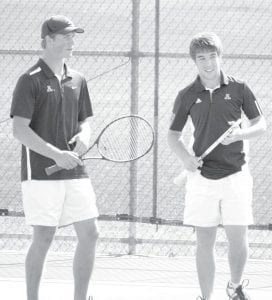 Kevin Fredrick and Nick Cassidy, AHS seniors, fell short in their bid for a trip to the Division II boys state tennis tournament.

The Blue Streak duo finished fourth at the district tournament held at Bowling Green State University, Wednesday, May 16, and Saturday, May 19.

They started their district run with a 6-2, 6-3 win over Lexington’s Bryce Witchey and Matt Barkett on Wednesday.

They won their quarterfi nals match against Sandusky Perkins’ Jamal Hamad and Gabe Murray 3-6, 6-4, 6-3, which advanced them to the semifinals on Saturday.

A win would guarantee the AHS duo a trip to state. A loss would drop them into the consolation match for third place.

Dropping to the match to determine third place, they went up against Lexington’s Matt Youse and Jon Mc- Carther.

Youse and McCarther won in three sets, 6-1, 3-6, 6-3 to close out Fredrick’s and Cassidy’s high school careers.

“Nick and Kevin had an amazing season, both as singles players and also as a doubles team,” said James Kidder, AHS coach.

“I couldn’t have asked for anything more from either of them. To make it to the district championships in Division II is quite an accomplishment.

“It is important for people to realize that these two boys just started competing as a doubles team less than one month ago. They gave it their all on the court every time they played and they set the bar high for future Archbold High School tennis players.

“Their outstanding work ethic made them the players they are today.”

Happiness is when what you think, what you say, and what you do are in harmony.– Gandhi