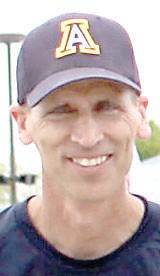 Joe Frank, the coach who led the Archbold softball team to 11 straight Northwest Ohio Athletic League titles and more than 300 victories, is stepping down from the position.

Frank will continue to coach boys junior varsity basketball, which he has done for more than 30 years.

“He has done an awesome job, and has had a huge impact on a lot of young people,” Rex said.

During his tenure, teams coached by Frank compiled a win-loss record of 334-86, and won 12 NWOAL titles.

Through 2015, AHS softball teams compiled 753 wins, the third-highest in softball in the state at that time.

The Streaks advanced to the Division III regional championship before bowing out of the tournament. They ended the season with a 19-6 record.

Cassi Wyse and Payton Robinson were named First Team All-NWOAL, while Gabby Nafziger and Shelby Cline were named to the second team.

A teacher with more than 35 years of experience, Frank is just the third coach in the history of AHS softball.

She was followed by Bob Gomez, who ran the program for three years.

Frank took over after Gomez.

Frank’s softball coaching position will be filled in the fall, the normal time for hiring spring sports coaches.